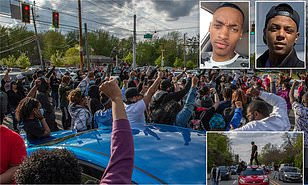 Officials said both men exchanged gunfire with officers, adding that the second shooting early Thursday morning could have been an ambush on police.

Police did not have body camera or dash camera footage of either shooting. Both of the men were black, as were most of the protesters.

The pregnant woman, who was white, was walking along an expressway ramp when an officer driving to work struck her with his vehicle.

Events surrounding the first shooting were livestreamed on Facebook, including comments by a responding detective who is heard saying: 'I think it's going to be a closed casket, homie,' an apparent reference to a closed-casket funeral.

'Let me be clear, these comments are unacceptable and unbecoming of our police department,' Indianapolis Metropolitan Police Chief Randal Taylor told reporters during a news conference.

'We'll be pursing immediate disciplinary action against that officer,' Taylor added, going to great lengths to assure the investigations into all of the deaths will be thorough and transparent.

'I hope you understand that I'm one that is willing to acknowledge that if we made mistakes here, we will address them,' he said.

'But let the investigation run its course before we jump to conclusions - either on our side or on the community's side.'

Many wore face masks aimed at reducing the spread of the coronavirus and at times shouted, 'No justice, no peace.'

The pregnant woman was identified as Ashlynn Lisby, 23. Her fetus also did not survive.

Protests began after video of the events leading up to Reed's shooting appeared on Facebook.

The video, which appears to have been recorded by Reed, shows him being pursued by police both in his car and on foot before incoherent shouting and popping sounds are heard.

Later came the detective's comment, which also was broadcast live on social media.

Taylor said Thursday that the detective was not present when the shooting happened.

Reed's father, Jamie Reed, said he had seen the video and was 'crushed' by its contents.

'It just shows me that we´re not really being protected and served. We're being hunted,' he told reporters at Thursday's protest.

'My son was a great son. I love him to death. He was just a typical young adult like anybody else. He didn't deserve to die like that.'

Military records show he served less than a year, in 2017. Details of separations cannot be released under privacy rules.

Reed's shooting happened around 6pm on Wednesday after a pursuit that began when officers, including Taylor, observed someone driving recklessly on Interstate 65, police said.

Video shows that at one point after police stop pursuing him, Reed laughs and cheers.

'I'm not going to jail today!' he shouts.

Supervisors ordered an end to that pursuit because the vehicle was going nearly 90 mph, police said.

An officer later spotted the car on a city street before being parked, then chased Reed on foot, Assistant Chief Chris Bailey said.

According to police, the officer first tried to use a stun gun, then shot Reed as they exchanged gunfire.

Bailey said it appears that a gun found near Reed had been fired at least twice.

The officer who shot Reed is black, The Indianapolis Star reported, and he has been placed on administrative leave.

The second shooting happened about eight hours later, as police investigated a burglary at an apartment complex.

Police said a man armed with a rifle shot at four officers as they approached the apartment about 1.30am on Thursday.

Taylor said the initial investigation suggests that Rose 'may have made the call with the intention of initiating an ambush-style attack on the officers when they arrived.'

Between the shootings, Officer Jonathon Henderson, a 22-year veteran, struck Lisby with his vehicle.

Police said Henderson requested help and rendered first aid to the woman. Lisby was pronounced dead at a hospital.

The Greater Indianapolis NAACP said in a statement that it was monitoring information about the shootings.

'All of us are trying to make a new normal in an un-normal time. Incidents like these do not help restore normalcy to our community,' said Chrystal Ratcliffe, president of the NAACP branch. 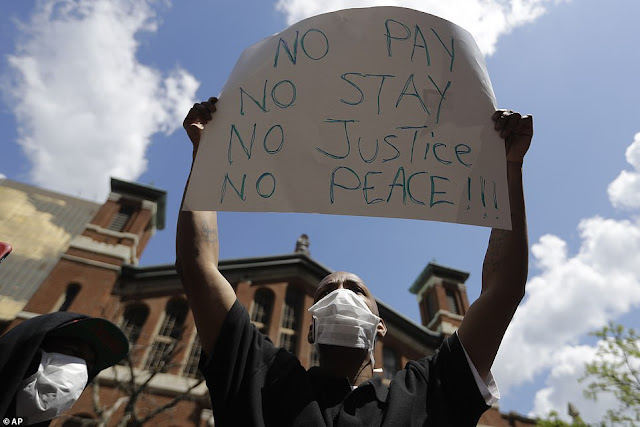 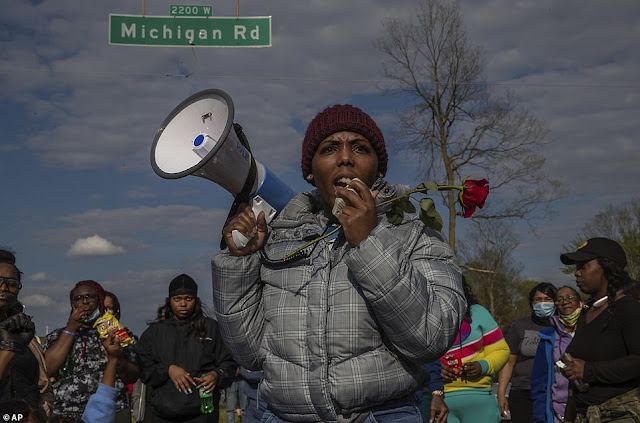 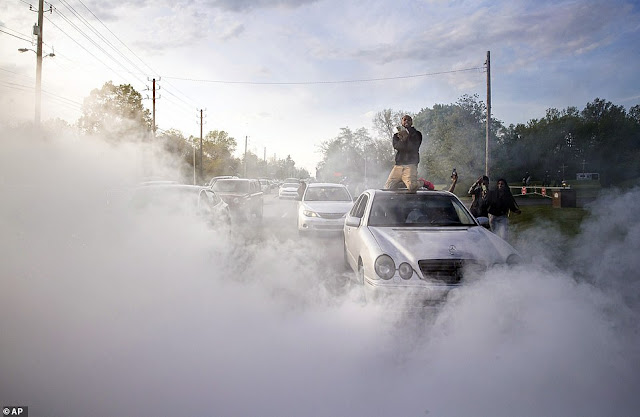 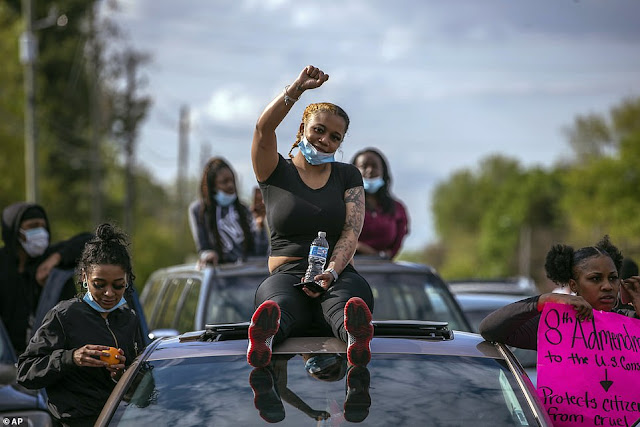 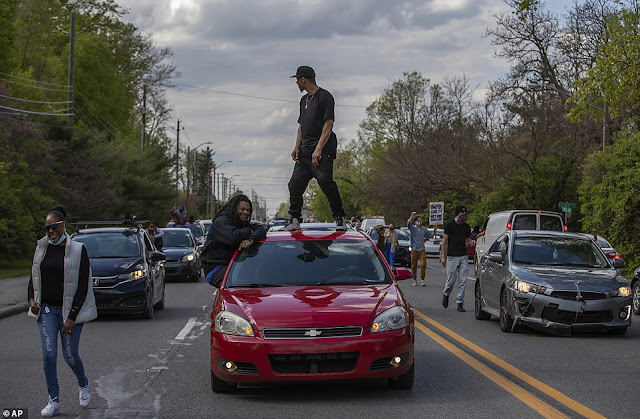 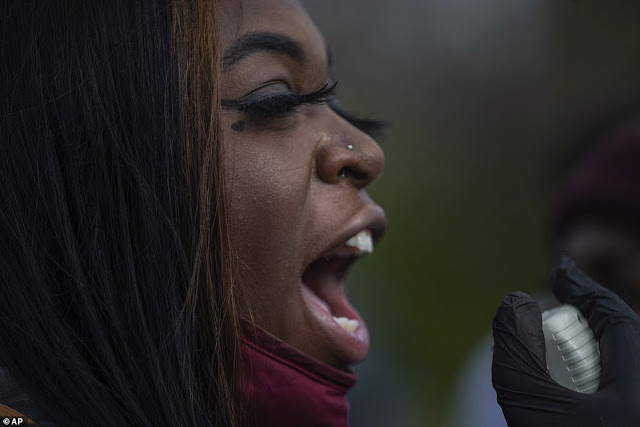 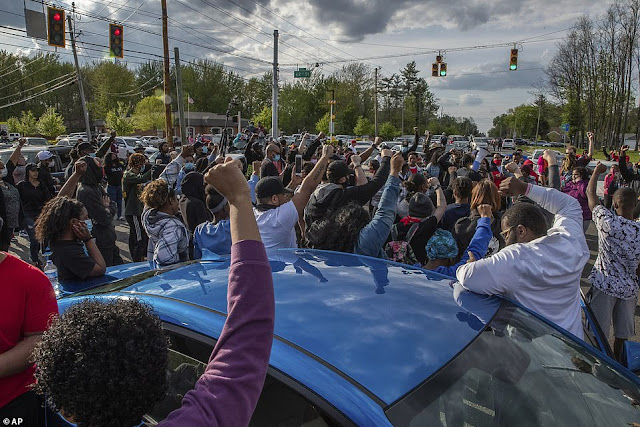 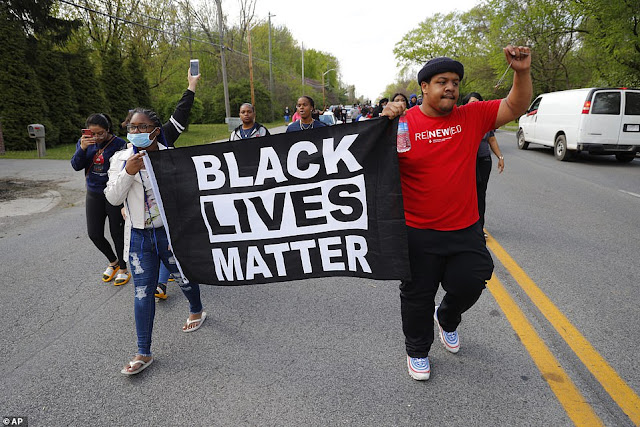 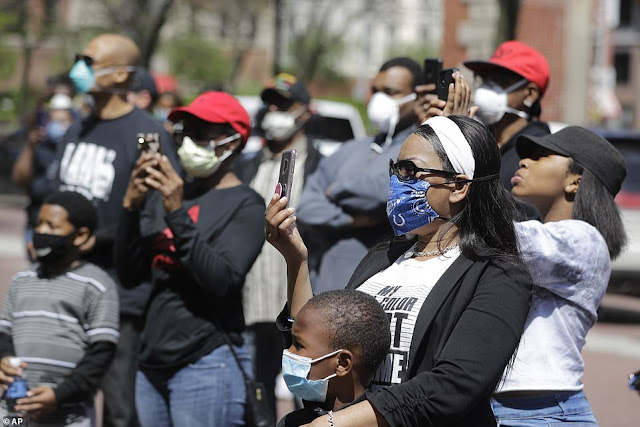