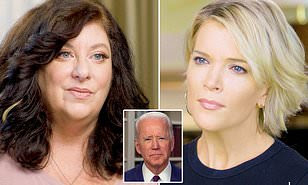 Tara Reade, the woman who's accused Joe Biden of s.e.xual assault, sat down with Megyn Kelly for her first major on-camera interview and included new details about the alleged incident - and said she wants to see Biden drop out of the presidential race.

For the first time in the telling of her story to news organizations, Reade told Kelly that Biden 'said something vulgar' to her during the alleged assault, which Reade said occurred when she was working for Biden in the U.S. Senate in 1993.

'He said I want to f*** you,' Reade told the former Fox News and NBC News anchor.

Since March, Reade has told reporters that Biden pushed her up against a wall in a Capitol Hill hallway, told her that he 'heard' that she liked him, and proceeded to stick his hand down her skirt and digitally penetrate her. When she froze up and indicated that she wasn't interested, she consistently quoted him saying to her that she meant 'nothing' to him.

In the telling with Kelly, she added the four-letter expletive.

'And he said it low. And I was pushing away and I remember my knee hurting because our knees, because he had opened my legs with his knee and our kneecaps clashed, so I felt this sharp pain,' Reade said. 'His fingers were inside of my private area, my vagina,' the ex-staffer added.

In every telling of the story, Reade said Biden told her she 'was nothing' before walking away. 'I think that's the hardest thing,' she told Kelly. 'Those words stayed with me my whole life.'

She told Kelly that she wanted to say 'stop.' 'I thought it, I don't know if I said it,' she said.

She also said she wanted Biden to end his presidential run and face the music.

'I want to say you and I were there, Joe Biden, please step forward and be held accountable, you should not be running on character for president of the United States,' Reade told Kelly, who had asked what her message was for Biden.

Kelly followed up by asking Reade if she wanted Biden to withdraw from the presidential contest.

'I wish he would,' Reade answered. 'But he won't, but I wish he would, that's how I feel emotionally,' Reade said. She previously wrote on social media that Americans should support Bernie Sanders, Biden's former Democratic primary rival.

She then told Kelly that an apology now wouldn't be sufficient. 'I think it's a little late,' Reade said.

Reade revealed to Kelly that she had taken her complaint to both Elizabeth Warren and Kamala Harris' presidential campaigns when they were still active.

'I tried to reach out to them,' Reade said. 'I didn't get a response.'

She said she chose Harris because as a Californian, the ex-2020 candidate is her senator.

Reade also told Kelly that she would testify under oath and be cross examined, but she'd only take a polygraph test if the former vice president took one first.

'I'm not a criminal,' Reade said. 'Joe Biden should take the polygraph. What kind of precedent does that set for survivors of violence? Does that mean we're presumed guilty? And we all have to take polygraphs.'

'So I will take one if Joe Biden takes one, but I am not a criminal,' Reade added.

Kelly, formerly of Fox News Channel and NBC News, had announced earlier Thursday on Twitter that she had nabbed the first major sit-down with Reade, who previously complained about the big networks not giving her TV time.

'Her story & some tough Q's in a riveting exchange,' Kelly wrote. 'A ton of news coming ... ,' she said and included a photo of both she and Reade.

Since leaving NBC News in January 2019, Kelly has worked for herself, posting interviews to her YouTube channel, and then promoting them on social media platforms.

The first clip of the interview, which Kelly posted on Twitter late Thursday afternoon, began with Reade telling the former Fox anchor about harassment she's endured at the hands of so-called Biden 'surrogates.'

'It's been stunning, actually, how the - some of his surrogates, with the blue checks, that are his surrogates, have been saying really horrible things about me and to me on social media,' Reade said.

'He hasn't himself, but, there's a measure of hypocrisy with the campaign saying it's safe,' she continued.

'It's not been safe,' Reade said. 'All my social media has been hacked. All my personal information has been dragged through. Every person that maybe has, you know, a gripe against me, an ex-boyfriend or an ex-landlord, whatever it is, has been able to have a platform rather than me.'

'They're just doing stories. No anchors, no nothing like that,' she said.

At the time, Smith reported, Reade was in talks with Fox News Channel about doing an on-camera interview, with 'Fox News Sunday' with Chris Wallace looking to be the venue.

Reade told The Times that she backed out due to getting death threats. A Fox News source told DailyMail.com that the network was en route to the interview and Reade canceled for security concerns.

She brought the death threats up again Thursday in her sit-down with Kelly.

'I got a death threat from that because they thought I was being a traitor to America,' Reade said, pointing to some postings that branded her a Russian agent.

'And his campaign is taking this position that they want all women to be able to speak safely, I have not experienced that,' she added.

Reade previously did an on-camera interview with Hill.TV, but when discussing media coverage with The Times, she was referencing major network television, saying she had hoped for a sit-down with someone like Gayle King, the host of 'CBS This Morning.'

Reade has accused Biden of sticking his hand down her skirt and digitally penatrating her in a Congressional hallway when she worked for him as an aide in 1993.

The allegations evolved from what Reade had told reporters in 2019 when a number of women came out and said Biden had touched them inappropriately, though not in a sexual way.

Reade had previously claimed that Biden liked her legs and wanted her to waittress at a Capitol Hill cocktail party while she was on staff. Reade also complained that he was touchy-feely, putting his hands on her shoulders, neck and hair.

'This is not a story about sexual misconduct; it is a story about abuse of power,' she had told Vox reporter Laura McGann, who wrote about Reade's changing story in an essay Thursday.

'None of that means Reade is lying, but it leaves us in the limbo of Me Too: a story that may be true but that we can’t prove,' McGann wrote.

While a neighbor of Reade's recalls the ex-Senate staffer talking about an incident with Biden in the mid-90s, according to reporting from Business Insider, so far no official documentation has been produced. Reade has also said that the sex assault charges weren't included in any Senate complaint she said she made.

Biden denied the allegations on-camera last Friday on 'Morning Joe,' which was his first television appearance pushing back on Reade's story.

Since leaving NBC News, Kelly's video report on how real life Fox News employees responded to the movie 'Bombshell,' a film where she's portrayed by Charlize Theron, was her most widely viewed piece of content, receiving 1.5 million hits on YouTube.