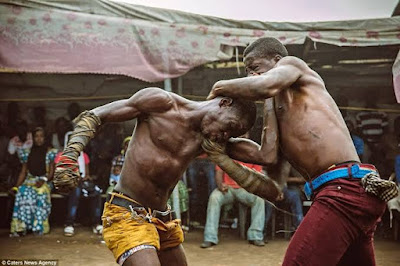 This is just as one Prophetess Evelyn Owoleke of the Cherubim and Seraphim Church, Bayo Ajao Street Aboru, Lagos, was arrested in connection with the death of a woman during child delivery in the church.

Vanguard gathered that the deceased, Taiwo Adekoya, who was flung away by one of the contenders, hit her head on a concrete and passed out.

Trouble started last Friday, when a man identified as Owolabi Fasasi, a resident of Ogun street, Mushin, stormed a woman’s apartment at Itire road and attempted to forcefully take her three months old baby, whom he claimed was his.

Narrating how Adekoya met her unexpected end, mother of the three months old baby, Anuoluwapo Adeyemi, said, ” my husband came visiting on Friday, as we live apart. While discussing with him, Owolabi Fasasi, who lives at Ogun street, suddenly appeared and threatened to take my three months old baby, Kausarat, away. He did not explain why he wanted to go with the baby.

As he was shouting, people gathered and tried to pacify him and make him explain why he wanted to go with the baby but he refused to say anything, insisting rather that he must go with the baby.

” As he tried to force his way to the couch where my baby laid, my boss, Taiwo Adekoya, tried to hold his hand to prevent him. But he pushed her away. She fell and became unconscious. She was rushed to hospital where she was later confirmed dead”.

The corpse according to the Lagos State Police spokesperson, DSP Elkana Bala, was deposited at the mortuary for autopsy.

“The suspect was arrested by homicide detectives. An investigation is ongoing. He will be charged to Court”, Bala said.

Meanwhile, Prophetess Evelyn Owoleke’s arrest was made following a report by one Olaloye Jolayemi, at Oke-Odo police division.

She told the police that one of her relatives, Seun Olorunto, 39, died moment after she was delivered of a baby boy in the church.

Homicide detectives according to the command’s spokesman, ” visited the scene and found the woman lying in the pool of her blood, suggesting that the deceased person might have bled to death due to complications. The corpse was removed from the Church to the General Hospital Yaba, for autopsy. The infant has been taken to hospital for medical examination and care. The traditional/spiritual midwife was arrested and taken to State CID Yaba. An investigation is ongoing”, Bala said.