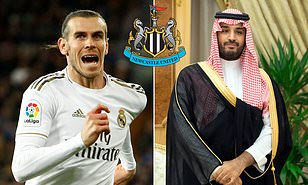 Newcastle's prospective new owners have reportedly earmarked Gareth Bale as their priority summer signing as they bid to make their mark on the Premier League.

The Magpies are currently the subject of a £300million bid from a wealthy group of investors including the Saudi Arabian Public Investment Fund.

That bid has been accepted by Newcastle's current owner, Mike Ashley, but must be given the green light by the Premier League before it's rubber stamped.

A decision is likely to be made after a meeting by league chiefs this week and could see Newcastle handed a sizeable transfer war chest if it's approved.

Should it go ahead, Spanish outlet Marca has reported that Bale is their first choice summer target and are confident they have the cash and strategy to convince him to join the club.

Newcastle are keen to appoint Mauricio Pochettino, who is a keen admirer of Bale, as their new manager, having previously admitted he would've been keen to sign him during his time as Spurs boss.

Bale came close to leaving Madrid last summer after Zinedine Zidane made it public that the Welshman was no longer part of his first-team plans.

But after appearing to be on the brink of moving to Chinese Super League side Jiangsu Suning, Madrid pulled the plug on the move at the 11th hour.

This summer will be the first time Tottenham don't have first refusal on re-signing Bale in the event another club make a bid for his services.