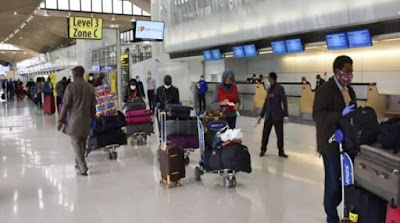 The Federal Government has cancelled the planned evacuation of 200 stranded Nigerians from Canada.

The 200 were billed for evacuation on  Wednesday.

In a statement on Monday, the Nigeria High Commission in Canada stated that an arrangement had been concluded with a local airline for the airlifting of the passengers.

But the exercise has been cancelled following the Federal Government announcement that subsequent evacuation of stranded Nigerians abroad would be staggered due to lack of accommodation for the mandatory 14 -day isolation of returness, The Nation reports.

The Minister of Foreign Affairs, Mr. Geoffrey Onyeama had on Monday said the Presidential Taskforce (PTF) on Covid-19 had reached its saturation point following the evacuation of 678 Nigerians from United Arab Emirate (UAE), United Kingdom (UK) and United States ((U.S) in the last one week.

He said further airlifting would have to wait until the current returnees in isolation centre are discharged.

He said the accommodation available to PTF was 600 coupled with medical advice against overstreaching the personnel at the isolation facilities.

Owing to these, the Federal Government announced the airlifting of Nigerians from Canada has been cancelled with a new date to be announced.

The cancellation was confirmed by the spokesperson of the Ministry of Foreign Affairs, Mr. Ferdinald Nwoye.

He said: “The planned evacuation has been cancelled with no new date to be announced.”

But for the cancellation, it said the plane would have picked the prospective passengers from two locations in Toronto and Alberta.