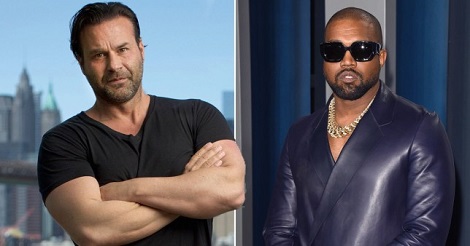 Kanye West’s former bodyguard Steve Sanulis has revealed some of the ‘ridiculous rules’ the rapper made him stick to while he was working for him.

Steve, who got into being a celebrity bodyguard after working as a stripper and a policeman (yes, at the same time), opened up about some of the demands Kanye asked him for.

Speaking on the Hollywood Raw podcast with Dax Holt and Adam Glyn, Steve revealed that some of Ye’s demands didn’t make much sense.

He explained: ‘He wanted you to stay 10 paces behind him on a city street. So obviously if someone is going to come up and do something, by the time I try to run up and prevent it, it would have already happened.’

Steve appeared to start his employment with Kanye on the wrong footing after committing a faux pas in Kanye’s eyes on his very first day.  He explained: ‘The first day I met him…it was fashion week. I was supposed to meet him at the studio.

Again, that was our first interaction. He went for the first option.’ Steve also let slip that he thinks Kanye was ‘one of my least favourite people to work with over the course of time’, and that he suspects he and Kim Kardashian would call the paparazzi on themselves.