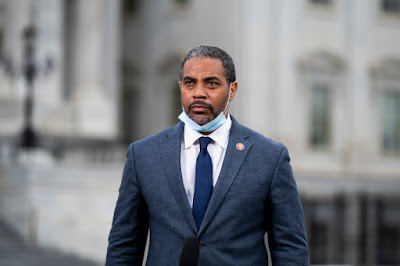 A married Nevada congressman has admitted having a longstanding affair with a former intern calling herself “Love Jones” after she exposed him in an explosive series of podcasts.

It started in 2009 when she was a 21-year-old intern at then-Senator Harry Reid’s Nevada office and they only broke ties in April, the same month she started her podcast, she told the Las Vegas Review-Journal.

“It is true that I had a previous relationship outside of my marriage, over the course of several years,” Rep. Horsford told the paper.

“I’m deeply sorry to all of those who have been impacted by this very poor decision, most importantly my wife and family.

“Out of concern for my family during this challenging time, I ask that our privacy is respected,” he said.

The 47-year-old congressman calls himself a “devoted family man” in his online bio, and has been married since 2000, long before the affair started.

“Rep. Horsford has raised a strong family with his wife, Sonya Horsford, and their three children,” his bio states.

Linder hid behind the name “Love Jones” for her podcast and related social media until coming forward formally to the Vegas paper last week.

Linder said their sexual relationship continued intermittently for a decade until 2019, and they remained in contact until April. Linder never worked for Horsford in any capacity.

She told the Review-Journal that Horsford offered her financial support and ties to political connections — and even used his congressional staff to help film a segment for her young son’s YouTube show.

Linder, who is also planning a book told the paper she decided to speak out as “an empowering journey,” ending the affair because she “deserved more.”

She says she had only kept quiet until now because she was “loyal to a fault.”

“He knew how in love with him I was, and he knew what he could do and get away with,” she told the Review-Journal. “He never told me to keep quiet. He didn’t have to.”

Despite insisting she does not have political motives in coming forward, she still claims he should not run for re-election now his affair has been exposed.

“He obtained this position under false pretenses that he was a family man and man of God,” she told the paper. “He should take a step back, atone, and if people are satisfied, then he can come back into politics.”

However, an aide for Horsford insisted, “This was a private relationship of the congressman’s and this was in no way related to his public office.”