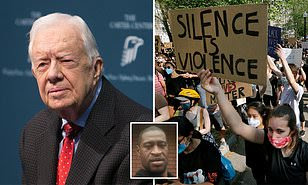 Former president Jimmy Carter has shared a stirring statement addressing the police killing of George Floyd and calling for the government to assure justice is served.

Carter, 95, assumed he and his wife Rosalynn are 'pained by the tragic racial injustices and consequent backlash across our nation in recent weeks.'

While the 39th president expressed solidarity with peaceful protests he condemned breakouts of violence across the country during demonstrations and clashes with police.

'Our hearts are with the victims’ families and all who feel hopeless in the face of pervasive racial discrimination and outcorrect cruelty. We all must shine a spotlight on the immorality of racial discrimination. But violence, whether spontaneous or consciously incited, is not a solution,' he assumed in a statement released Wednesday.

The couple released their statement as protests enter their ninth day in the US with organizers demanding police accountability and an discontinue to police brutality.

Floyd – a 46-year-recent black man - died on Monday after three Minneapolis Police officers held him face down on the ground and white cop Derek Chauvin pressed his knee into his neck for nearly nine minutes as the man cried: 'I can't breathe.'

Harrowing video of his death sent shock waves across the country.

Carter opened up on his own experience growing up in the South amid segregation and urged for today's government to to assist create equality a reality.

'As a white male of the South, I know all too well the impact of segregation and injustice to African Americans. As a politician, I felt a responsibility to bring equity to my state and our country. In my 1971 inaugural address as Georgia’s governor, I said: "The time for racial discrimination is over."'

'With remarkable sorrow and disappointment, I repeat those words today, nearly five decades later,' he added.

Carter praised the public outweep for racial justice saying, 'we have seen that silence can be as deadly as violence.'

'People of power, privilege, and moral conscience must stand up and say "no more" to a racially discriminatory police and justice system, immoral economic disparities between whites and blacks, and government actions that undermine our unified democracy,' he said. 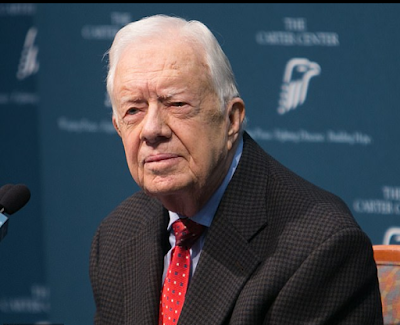 'We are responsible for creating a world of peace and equality for ourselves and future generations.

Carter spoke up following statements from prior presidents including Barack Obama and George W. Bush.