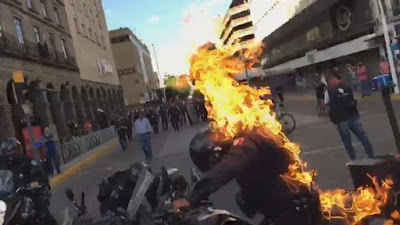 Disturbing footage shows a police officer being set on fire by a protester during demonstrations over the death of a builder allegedly beaten to death by police.

The incident took place during protests in the city of Guadalajara, in the western Mexican state of Jalisco as locals gathered to ask for justice for Giovanni Lopez, 30, who died after his arrest.

In the video, officers in helmets can be seen facing up to protesters when one of the officers gets onto his motorbike.

A protester then runs up behind him and pours flammable liquid onto the officer before setting him alight.

The officer goes up in flames along with the seat of his bike and he falls to the ground.

Protesters then rush towards him but they are kicked away by other officers in riot gear who shield the officer and take him to safety.

The Governor of Jalisco, Enrique Alfaro, confirmed that the officer was injured in the protest along with five others in the police force.

Around 26 people were arrested while three patrol cars were reportedly burnt out.

The protesters were shouting “Giovanni was killed by the state” as they seek justice in the case of Lopez who died after being arrested by municipal police in Ixtlahuacan de Membrillos, in Jalisco state.

Protesters claim the construction worker died after being beaten by police last month.

He was arrested for an "administrative offence" with reports saying he was stopped whilst not wearing a face mask in public.

Governor Alfaro claimed that “interests coming from Mexico City, with the goal of causing instability” were behind the protests and said that no violent acts were committed against the protesters.

He said: “Guadalajara police and state police met the requirements of the circumstances and knew to resist without falling into provocation”.

"We already have the first arrests and we have decided to take control of the Ixtlahuacan de los Membrillos municipal police. And I give you my word, Giovanni's death will not go unpunished," Jalisco Governor Enrique Alfaro said on Twitter.