My Enemies Are At Work Over Corruption Allegations- Obasa 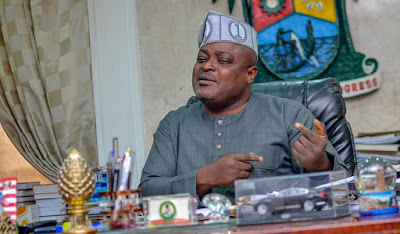 The embattled Lagos State House of Assembly Speaker, Hon. Mudashiru Obasa has said that the corruption allegations against him by an online news medium were the handiwork of his enemies.

Obasa, who appeared before the nine-man Fact Finding Panel Committee of the House headed by Hon. Victor Akande (Ojo Constituency 1) on Saturday, insisted that the allegations were unfounded.

The Speaker stressed that the vehicles bought for the members of the House and other expenses made by the House were done with the approval of the House and that of the Fund Management Committee (FMU) headed by him.

“We went through the Public Procurement Agency (PPA) and others and the vehicles were distributed appropriately. It was agreed at the parliamentary meetings on about four occasions and the Clerk of the House is the secretary.

“Also, it is not true that my wife collects N10 Million monthly from the House. Anyone who says she does should come with proofs and evidences. My approval limit as the Speaker of the House is N100 million. Anything above that would have to be approved by the FMC.

The Speaker also debunked an allegation that N258 million was spent for the printing of invitation cards for the inauguration of the 9th Assembly.

He stressed that the whole event cost N61 Million and that N1.1 million was spent to print the invitation cards.

“It is not possible to spend N258 million to print invitation cards. We are not involved in such a frivolous expenditure,” he added.

On the expenditure of N80 Million as estacode for the training of women in Dubai, the Speaker said that wives of 20 lawmakers attended the event and that he was there to declare the event open.

“We gave N4 million to each of the participants for air ticket, hotels, feedings and local travel.

“Air ticket to Dubai alone is about N2 million. Some of these allegations were raised for a crusade to get the Speaker out of office.

“The House of Assembly is above common standard of excellence and we have to train people, and this comes with a cost. Learning is not cheap and I have never collected N80 Million for estacode at a go before,” he said.

Defending the purchase of eight Hiace buses for committee works in the Assembly, Speaker Obasa said that it was discovered that the House was spending a lot of money to repair vehicles, which he said was why the House decided to buy the buses and that the buses were there for everybody to see with documents to defend the purchases.

The Speaker also denied the allegation that he spent N53 million for a trip to the United States of America with his mistress.