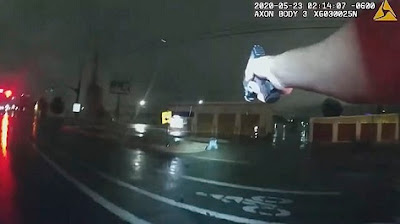 A 22-year-old man suspected of armed robbery at a Salt Lake City strip club was fatally shot by cops last month while he was running away from officers who fired at least 20 rounds at him, body camera footage just released shows.

Bernardo Palacios-Carbajal, 22, was shot and killed May 23 after police who were responding to a call of a gun threat chased him when he ran from a motel.

Officers said a weapon was found near him after he was shot.

The two officers who fired their weapons have been put on administrative leave, which is standard practice for a police shooting. 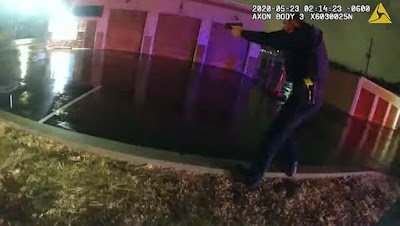 The case is still under investigation.

According to police, an armed robbery was reported just before 2am at the Trails Gentlemen's Club in Salt Lake City.

'The victim went toward the dumpsters on the east side of the parking lot ... when he was approached by two males whom he had seen inside the club earlier on in the night,' according to the police watch log.

'Both males had guns and told the victim to empty out his pockets. Once they took his money and wallet, the victim fled the scene.'

The victim, who just revealed his first name, Alvaro, alleged that Palacios, was one of the men who robbed him at gunpoint.

The Salt Lake City Police Department released three videos from body cameras worn by officers who were on scene.

The video showed Palacios running away from the officers at the Utah Village Motel just after 2am.

Capt. Richard Lewis said the officers chased him and yelled at him 17 times to either 'stop,' 'show me your hands,' or 'drop it,' referring to a gun, the Deseret News reported.

The footage shows Palacios trip and fall several times before getting up and continuing to run.

He then picks up something from the ground and continues running before two officers begin shooting.

After Palacios-Carbajal is shot in the back and falls to the ground, officers continue shouting at him to show his hands, footage shows.

Based on the body camera footage, it does not appear that Palacios pointed a gun at the officers involved.