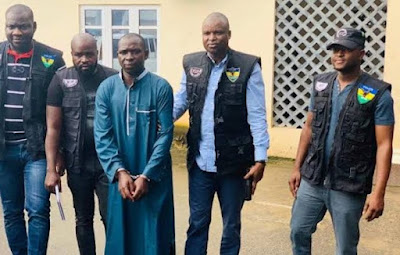 Suspected  kidnap kingpin, Alhaji Hamisu Bala (aka Wadume) was arraigned on Monday before a Federal High Court in Abuja.

He was arraigned with six others on an amended charge of 13 counts bordering on terrorism, kidnapping and related offences.

The others are: Aliyu Dadje (a police Inspector), Auwalu Bala (aka Omo Razor), Uba Bala (aka Uba Delu) Bashir Waziri (aka Baba Runs), Zubairu Abdullahi (aka Basho) and Rayyanu Abdul.

Wadume and others were arrested in Taraba State following last year’s ambush on a team of policemen who had gone to arrest Wadume.

Three policemen died in the incident.

The case was initiated through a 16-count charge filed on January 21, this year, by Simon Lough (an Assistant Commissioner of Police) in the name of the Inspector General of Police (IGP), with 20 defendants.

On June 3, this year, a lawyer from the Federal Ministry of Justice, Shuaibu Labaran, told the court that the Attorney General of the Federation (AGF) had taken over the prosecution of the case pursuant to his power under Section 174(2) of the Constitution.

Labaran said the case file was handed to his office the previous day, adding that only six of the 20 defendants were present in court.

He sought time to enable the prosecution put its house in order, liaise with the arresting and investigating agencies to ensure that all the defendants are brought to court.

But only seven of the 20 defendants were in court on Monday.

Also absent were: Aondona A. Iorbee, an Assistant Superintendent of Police (ASP), Ahmad Suleiman (aka Dan Ball) and Hafizu Bala (aka Mai Welder).

Those arraigned on Monday pleaded not guilty when the charge was read to them.

Wadume’s lawyer Y. D. Dangan told the court that he had a pending bail application for his client, who he claimed to be critically ill and coughed out blood.