Black Lives Matter Protester Tests Positive For Coronavirus After Rally With 10,000 Others 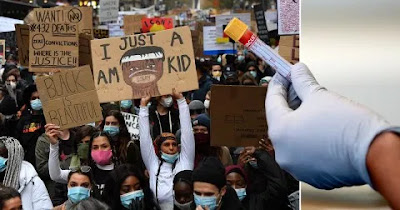 A Black Lives Matter demonstrator has tested positive for coronavirus after attending a rally in Melbourne with 10,000 other people.

He marched through the city on Saturday and developed Covid-19 symptoms 24 hours later, sparking fears of a second spike in infections. Authorities fear the man in his 30s could have passed the disease onto others even if he did wear a mask to the rally.

Speaking to Sydney’s radio 2GB Home Affairs Minister Peter Dutton said: ‘This realises our worst fears. Now we could slip back into a second wave like other countries have.’

The state of Victoria’s Chief Health Officer Brett Sutton said it was unlikely he caught the bug at the protest as he would not be showing symptoms so soon. He added: ‘It’s obviously helpful that the individual wore a mask but masks are not 100 per cent protection.’

Anyone who had close contact with the protester for more than 15 minutes will be asked to self-isolate under Australia’s contact tracing system. In a warning to protesters, Dr Sutton said: ‘We don’t want people gathering in groups larger than 20 in Victoria because of the risk to others. It is my strong recommendation not to go and it is the law.’

Treasurer Josh Frydenberg also condemned the protesters, saying: ‘People shouldn’t have gathered in those numbers for those rallies. In doing so, they put the broader community’s health at risk. That was the obvious message from the medical experts about those rallies. And it was very unfortunate that they proceeded in the way that that did.’

But activists taking part in the country’s protests have said while they are aware of the risks involved, they feel their cause is too important not to take to the streets.

Demonstrations have been held all over the world following the death of George Floyd at the hands of police in Minneapolis USA. 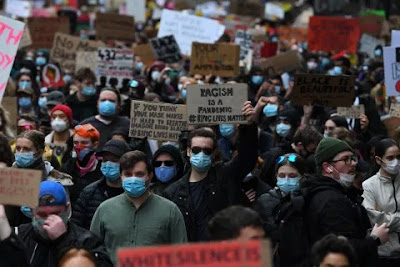 Many protesters across the globe have shown solidarity with the unarmed black man, who was recorded crying ‘I can’t breathe’ as policeman Derek Chauvin presses his knee into his neck for almost nine minutes.

But as British BLM protesters confront issues like the Windrush scandal and the country’s colonial past, Australian activists are taking on the frequent discrimination faced by Aboriginal people.

The royal commission into Aboriginal deaths in police custody found indigenous people were more likely to die in a cell because of a disproportionate rate of arrests.

Speaking to Melbourne radio 3AW he said: ‘I think the issues of last weekend were very difficult, but I think people carrying it on now, it’s not about that. It’s about people pushing a whole bunch of other barrows now, and it puts others lives and livelihoods at risk.’

Morrison warned rallies held over the weekend could end up halting progress in Australia lifting its lockdown measures, but Deputy chief medical officer Professor Michael Kidd said it was too early to tell if the protests will cause a spike.

He told ABC News this morning: ‘The incubation period for COVID-19 is five to seven days, up to 14 days. So we will only start seeing new cases occurring if that transmission had occurred on the weekend over the days ahead. We’re continuing to be very cautious and obviously we need to see what happens over the next few days.’

Parts of the country have begun slowly lifting lockdown restrictions, with pubs reopening along with some beaches. Sydney’s Bondi and Bronte currently have 500 people caps.

New South Wales Health Minister Brad Hazzard warned people to keep a distance from each other and said he has personally seen people ignoring this guidance. He said he had personally observed people in breach of health advice.


Haave you ever thought about writing an e-book or guest

authoring on other blogs? I have a blog centered on the same information you discus

and would love to have you share some stories/information.

I know my subscribers would value your work. If you are

evn remotely interested, feel free to send me an e-mail.