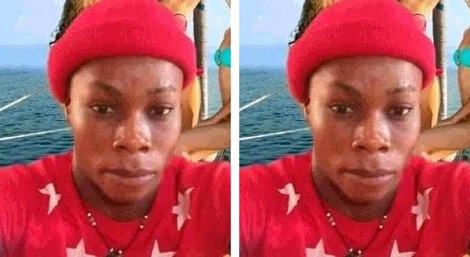 The late Onah was said to had cut the hair of one of the suspects, who pretended to be a customer only to alert his accomplices that stormed the salon on two motorcycles.(Wapbaze_Copyright)

It was gathered that the barber was shot on his throat region by the hoodlums.(Wapbaze_Copyright)

Residents, who were alerted by the gunshot, ran to the shop only to discover the barber in the pool of his own blood struggling for life.(Wapbaze_Copyright)

A shop owner, who pleaded for anonymity, said that it was around 4 pm when he noticed four young men patrolling the area with two motorcycles, adding that when he heard the gunshot and rushed to the scene, he met the barber already lifeless.(Wapbaze_Copyright)

A cousin of the deceased, Chinekwu Onah, said “I was playing draft few meters away from the scene when I heard the gunshot. I immediately rushed to the shop only to see my cousin already covered with blood. That was when I alerted the head of the neighbourhood watch in my area, Belushi Agbo.(Wapbaze_Copyright)

“He immediately arrived at the scene and we began searching for the hoodlums. Following intelligence from the residents, who saw when the hoodlums fled, we were able to apprehend one of the suspects. He had a fresh hair cut with bloodstains on his shirt.(Wapbaze_Copyright)

“Just to be sure, I touched his head and some particles of hair stuck to my hand as a result of the fresh hair cut. We have handed him over to the police.(Wapbaze_Copyright)

Meanwhile, the spokesperson of the Enugu State Police Command, Daniel Ndukwe confirmed the incident, adding that one of the suspects has been arrested and taken to the Criminal Investigation Department, CID, at Enugu metropolis while efforts are ongoing to fish out the rest of the suspects who killed the barber.