Trump Claims Coronavirus Might Have Been Spread On Purpose By China 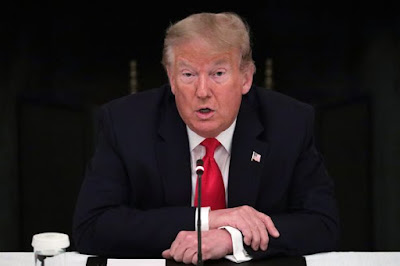 Donald Trump claims coronavirus may have been spread on purpose by China and believes some Americans wear face masks to oppose him.(Wapbaze_Copyright)

The US President told The Wall Street Journal "there's a chance it was intentional" in relation to the Covid-19 pandemic which began in Wuhan last year.(Wapbaze_Copyright)

He suggested China may have been motivated by their economy being in a "mess" while in contrast America's was "blowing them away" - though he didn't provide any evidence.(Wapbaze_Copyright)

"They're saying, man, we're a mess. The United States is killing us. Don't forget, my economy during the last year and a half was blowing them away. And the reason is the tariffs."

However, he reiterated this line of thinking is unlikely and it was probably down to incompetence - "but you never know".(Wapbaze_Copyright)

And while nearly 11 million people were tested in Wuhan as a second wave of the virus struck, Trump said he doesn't plan to introduce widespread testing of this kind in the US.(Wapbaze_Copyright)

"I personally think testing is overrated, even though I created the greatest testing machine in history," he said.(Wapbaze_Copyright)

The president has been criticised for failing to nationalise testing and for being too slow to deploy the Defense Production Act.(Wapbaze_Copyright)