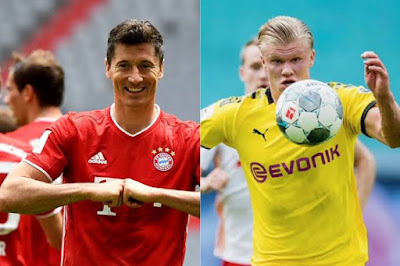 Bayern Munich striker Robert Lewandowski on Saturday broke the record previously held by Pierre-Emerick Aubameyang for the most goals scored by a foreigner in a Bundesliga season.(Wapbaze_Copyright)

Lewandowski scored twice in the first half against Freiburg to give him 33 league goals in 30 matches this season, having netted a total of 48 times in 41 games in all competitions.(Wapbaze_Copyright)

The Poland striker’s tally beats the previous record of 31 goals set by Gabon striker Aubameyang in 2016/17 for Borussia Dortmund before he moved to present club Arsenal the following season.(Wapbaze_Copyright)

With the Bundesliga season due to end next Saturday, Lewandowski is well short of Gerd Mueller’s remarkable all-time record for the most goals in a German league season when he scored 40 in 1971/72.(Wapbaze_Copyright)

Bayern are already confirmed as Bundesliga champions for the eighth consecutive season and are on course to repeat their 2013 treble.(Wapbaze_Copyright)

They face Leverkusen in the German Cup final on July 4 and are among the favourites for the Champions League, which resumes in August with Lewandowski as the top scorer in Europe with 11 goals in six games.(Wapbaze_Copyright)

Bayern routed Chelsea 3-0 in London in the last 16, first leg last March until the Champions League ground to a halt due to the coronavirus.