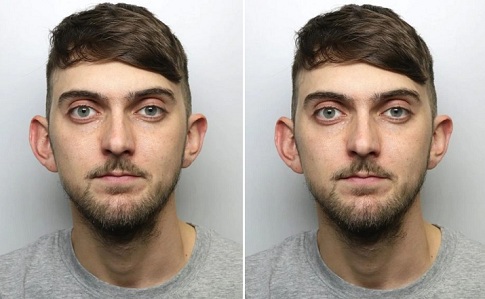 A man in the United Kingdom has been jailed for throwing a five-month baby at a TV cabinet after losing a live football bet.(Wapbaze_Copyright)

Taylor Biggins, who is from Birstall, Leeds, was sentenced to two years and ten months for throwing the baby towards a TV cabinet causing him to crack his head.(Wapbaze_Copyright)

Biggins, 24, had lost money betting on live football earlier in the day. The baby started crying and would not settle when Biggins shook him and threw him towards the TV cabinet near the bed.(Wapbaze_Copyright)

Mr Storey said medics expect the baby to have ‘at least mild cognitive impairment to his motor skills in the years to come’.(Wapbaze_Copyright)

The baby also suffered damage to his retinas but it is not yet clear whether his sight has been permanently harmed. The baby’s mother said what happened was a ‘poisonous act’.(Wapbaze_Copyright)

She said: “The baby is likely to have brain damage throughout his life.(Wapbaze_Copyright)

“The sad reality is that no prison sentence will compare to the life sentence he has caused.”

Biggins confessed he flew into a rage when the baby would not settle after waking up in the early hours of the morning. The boy was found unresponsive when police went to a flat in the early hours of October 25 last year. He was in a critical condition with skull fractures and bleeding to the brain and doctors did not think he would survive.(Wapbaze_Copyright)

Biggins was arrested by police the next day and protested his innocence.(Wapbaze_Copyright)

He claimed he had found the baby unconscious and not breathing when he went to check on him.(Wapbaze_Copyright)

Then he claimed the tot was injured by accidentally falling to the floor. Biggins admitted inflicting grievous bodily harm shortly before he was due to go on trial.(Wapbaze_Copyright)

The plea was on the basis that he did not intend to cause serious injury.(Wapbaze_Copyright)

He said: “I accept that I picked him up and shook him and threw him across the bed.(Wapbaze_Copyright)

“He went across the bed and struck his head on the TV cabinet. I accept by my actions that I am responsible for the totality of the injuries.”

Taylor Biggins has a previous conviction for assault in 2015 when he kicked his ex in the stomach while she was pregnant.