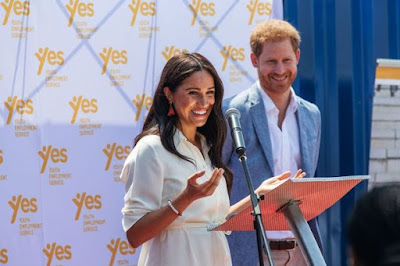 Prince Harry and Meghan Markle are set to make millions on the professional speaking circuit after reportedly signing with a high-profile agency who represent Barack and Michelle Obama, as well as Bill and Hillary Clinton.(Wapbaze_Copyright)

The Duke and Duchess of Sussex, who quit their royal life in Britain to set up home in Los Angeles, have struck a deal with the New York-based Harry Walker Agency.(Wapbaze_Copyright)

Former President Barack Obama reportedly earned almost £320,000 for one 2017 speech, while the Clintons averaged almost £200,000 per appearance in 2014.(Wapbaze_Copyright)

It is unclear what speaking fees will be for the Duke and Duchess, who will speak both together or individually, the Los Angeles Times reported.(Wapbaze_Copyright)

A source close to Harry and Meghan reportedly confirmed the couple had signed with the agency, which industry insiders say will net them millions as they seek “financial independence” away from the royal family.(Wapbaze_Copyright)

It is expected they will offer their services as keynote speakers with big money corporations and community forums in future.(Wapbaze_Copyright)

Harry in February spoke at an event hosted by investment banking giant JP Morgan where he revealed he had been in therapy for the past three years. The Duke’s team had held discussions with Goldman Sachs about forming a partnership.(Wapbaze_Copyright)

However, Majesty magazine editor Ingrid Seward has warned that Harry and Meghan may have to tell stories about their time in the royal family to justify their fees.(Wapbaze_Copyright)

She said: "No one wants to pay to hear them sounding off about gender equality and the environment.(Wapbaze_Copyright)

"Harry and Meghan will really have to up their ante, and they will absolutely have to tell some stories about the Royal Family."

The have reportedly said they will now focus their efforts on social issues such as racial injustice, in line with the Black Lives Matter movement, while continuing to highlight subjects such as gender equality, mental health and environmental concerns.(Wapbaze_Copyright)

The Queen banned the couple from using their ‘HRH’ titles for their private work as well as stopping them from using the ‘Sussex Royal’ brand that had collected 11million followers on Instagram.(Wapbaze_Copyright)

The couple have set up a new enterprise called Archewell, named as the inspiration for their son Archie, but reportedly last week hit a stumbling block with the United States Patent and Trademark Office after submitting their application on March 3 who described the plans as “too vague”.(Wapbaze_Copyright)