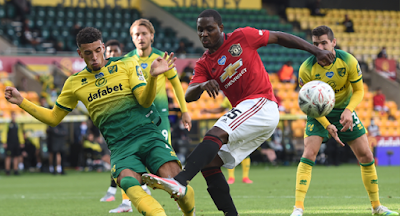 Nigerian striker Odion Ighalo continued his phenomenal record of scoring in every game he has started for Manchester United when he got the opening goal in today’s 2-1 win over Norwich City in the FA Cup quarter-final tie.(Wapbaze_Copyright)

After a barren first half, Ighalo gave United the lead six minutes into the second half, acrobatically stabbing home from close range after good work from Luke Shaw and Juan Mata.(Wapbaze_Copyright)

That goal was the fifth in four starts for Ighalo who was surprisingly signed in January by United on loan from Chinese club Shanghai Shenhua.(Wapbaze_Copyright)

While it was initially looking like Ighalo’s goal will be enough to give United a semifinal ticket, Todd Cantwell cancelled the goal with his 75th-minute strike as the game went into extra-time.(Wapbaze_Copyright)

However, Daniel Farke’s men made life more difficult for themselves heading few minutes before the regulation time ended after Timm Klose was sent off for a foul on Ighalo.(Wapbaze_Copyright)

Unfortunately, Marcus Rashford could only smash the resultant free-kick into the well-organised wall, a development that saw the tie go into extra time.(Wapbaze_Copyright)

With a numerical superiority to lean on, United turned the screw during extra time but found Tim Krul in inspired form, making one particularly strong save from Maguire to ensure the teams remained at parity.(Wapbaze_Copyright)

With the chance of winning a silverware getting brighter for Ighalo, he would be happy to have extended his loan spell with the Red Devils.