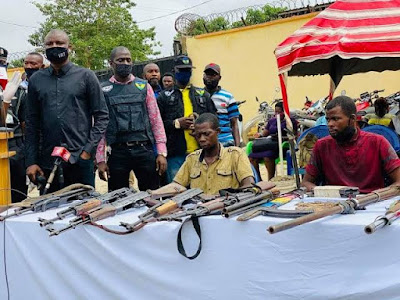 Police on Monday paraded two men suspected to have been involved in the kidnap and murder of a doctor, Audu Benedict, his son, Iranum, and a family friend after collecting N7.5 million ransom in Benue State.(Wapbaze_Copyright)

The suspects, Tehile Tsavbee and Gwa Tekula Henry, were paraded alongside 25 other suspects for offences ranging from kidnapping, robbery and illegal possession of firearms, among others.(Wapbaze_Copyright)

Force spokesman Frank Mba said Tsavbee and Henry were part of a kidnap gang led by one Tena, who is still at large, that have been terrorising Benue.(Wapbaze_Copyright)

Mba said the victims were abducted on their way to Abuja.(Wapbaze_Copyright)

The gang also kidnapped one Veronica, a sister to one of the suspects, Henry, who was later released after a ransom of N500, 000.(Wapbaze_Copyright)

Mba said, “This is the kidnapping syndicate that took Dr Audu Benedict, a native of Taraba State, his son Iranun Audu and a family friend who were on their way to Abuja, ambushed them on the way and killed them somewhere around Benue State. The family of the doctor paid a ransom of N7 million to these criminals. The doctor also raised a check N500,000 which one of the suspects personally cashed out in the bank.(Wapbaze_Copyright)

Tsavbee reportedly confessed that he carried out the act, but Tena, his boss, carried out the killings. He said he did not know why the victims were killed.(Wapbaze_Copyright)

Mba said the ringleader of the group, Jerome Matthew, was in custody, adding that six AK-47 rifles and several other weapons were recovered from the suspects.