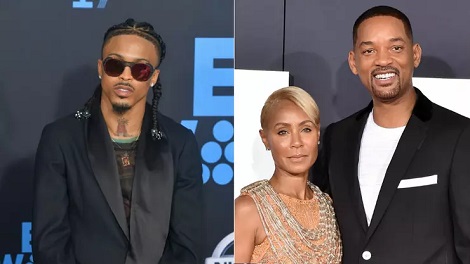 While August Alsina claims he was in a years-long relationship with Jada Pinkett Smith while she was married to Will Smith, the actress has issued a denial.(Wapbaze_Copyright)

After Alsina spoke publicly about allegedly being romantically involved with the actress, including the claim that her longtime husband gave Alsina his "blessing," Jada's reps have called the claims "absolutely not true," according to Page Six and TMZ. E! News has reached out for comment.(Wapbaze_Copyright)

The headline-making allegations surfaced this week in an interview between Alsina and Angela Yee, published on YouTube. During the sit-down, the topic of the 27-year-old singer's "Nunya" track came up along with the rumors that he had dated Smith.(Wapbaze_Copyright)

"Here's what I'll say," Alsina began in response. "People can have whatever ideas that they like, but what I'm not ok with is my character being in question, when certain things are questionable that I know is not me or that I know I haven't done."

He continued, "Contrary to what some people believe, I'm not a troublemaker. I don't like drama. Drama actually makes me nauseous...I also don't think that it's ever important for people to know what I do, who I sleep with, who I date."

However, the performer clarified, "In this instance, it's very different because as I said, there's so many people that are side-eyeing me, looking at me questionable about it. I've lost money, friendships, relationships behind it and I think it's because people don't necessarily know the truth, but I've never done anything wrong. I love those people."

Seemingly referring to Jada and Will, he added, "I don't have a bad thing to say about them. They are beautiful people."

The singer said he didn't have a choice but to express his truth after his life and wellness were being affected.(Wapbaze_Copyright)

"I actually sat down with Will and had a conversation due to the transformation from their marriage to life partnership that they've spoken on several times and it not involving romanticism," he alleged. "He gave me his blessing and I totally gave myself to that relationship for years of my life and I truly and really, really deeply loved and have a ton of love for her. I devoted myself to it. I gave my full self to it so much so to the point that I can die right now and be ok with knowing that I truly gave myself to somebody."

Alsina continued to pour his heart out, telling Yee, "I really loved a person, I experienced that. I know what that feels like and some people never get that in this lifetime, so I know that I'm completely blessed."

As for why Alsina stayed silent about the alleged relationship, "I never want to be the person to cause confusion because I love these people," he said. "I really genuinely do and I have literally never been in love in that kind of a way, so much so that being intertwined in that way—walking away from it butchered me."

He further said that the alleged split "probably will be the hardest thing that I've ever experienced in this lifetime."