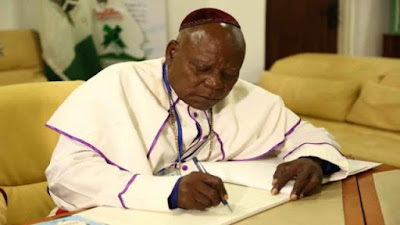 The Nasarawa State Police Command has announced the arrest of 11 suspected kidnappers of the Nasarawa State Chairman of the Christian Association of Nigeria (CAN), Bishop Joseph Masin.(Wapbaze_Copyright)

The state chairman of CAN was reportedly kidnapped by unknown gunmen at his residence in Lafia, the state capital, on May 28, 2020, but was released three days later by his abductors.(Wapbaze_Copyright)

Acccording to Longe, “the 11 arrested kidnap suspects of the Bishop include the duo of Mr. Saminu M. Haruna and Mr. Godwin Ali Agbo who are strongly suspected to be the masterminds of the crime.”

He also announced that the police have arrested a 42 years old man, Mr. Aliyu Adamu of Bukan Ari area of Lafia, who dragged an eighth year old girl, who was on her way to Islamic School, into his compound and had unlawful carnal knowledge of her.(Wapbaze_Copyright)

“The suspect was arrested during the act and claimed that he was motivated to act in that manner because of the dream he had, that if he had sexual intercourse with a child between the ages of five and ten, he will be rich,” the commissioner of police said.(Wapbaze_Copyright)

Longe stated that six suspected rapists and cultists respectively were equally arrested in the course of the command’s recent operation.(Wapbaze_Copyright)

He also declared that “11 firearms, 63 live am Pg munition, one motorcycle and the sum of N1,486,040.00 were recovered from the suspected criminals by the police,” he added.