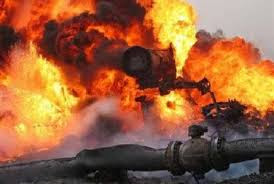 NPDC is the flagship subsidiary of NNPC.(Wapbaze_Copyright)

The explosion occurred on Tuesday at the petroleum company’s Benin River Valve Station.(Wapbaze_Copyright)

He disclosed this in a statement issued in Abuja entitled “NNPC Reports Explosion at NPDC’s Benin River Valve Station.”

Obateru said, “The incident, which occurred on Tuesday during the installation of a ladder on a platform (Benin River Valve Station) for access during discharging of Gbetiokun production, unfortunately caused  seven fatalities.”

The national oil firm said a detailed investigation of the cause of the explosion had commenced.(Wapbaze_Copyright)

It said the Department of Petroleum Resources had been duly notified and Form 41 was being prepared for the industry regulator as required in circumstances of this nature.(Wapbaze_Copyright)

“The bodies of casualties have been deposited in a morgue in Sapele, while families of the personnel involved are being contacted by their employers,” NNPC stated in its statement.