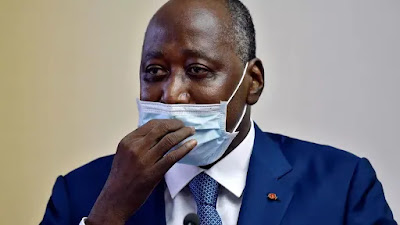 “I am deeply saddened to announce that Prime Minister Amadou Gon Coulibaly, the head of government, left us early this afternoon after taking part in a cabinet meeting,” Patrick Achi, secretary general to the Ivory Coast presidency, said on public television.(Wapbaze_Copyright)

Coulibaly returned to the West African country last week after a two-month absence in France to receive medical treatment for recurring heart problems.(Wapbaze_Copyright)

He was announced as the candidate for President Alassane Ouattara’s party in early March, after Ouattara ended months of speculation and said he would not seek a controversial third term.(Wapbaze_Copyright)

“I pay tribute to my younger brother, my son Amadou Gon Coulibaly, who was my closest collaborator for 30 years,” Ouattara said in a statement.(Wapbaze_Copyright)

“I salute the memory of a statesman, a man of great loyalty, dedication and love for his homeland,” he added.(Wapbaze_Copyright)