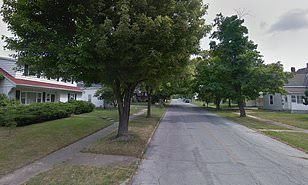 An Indiana man has been charged with shooting and critically injuring his newly-estranged wife's lover after finding the amorous pair in bed together.(Wapbaze_Copyright)

On Thursday night, officers with the Marion Police Department responded to a home in the 500 block of East Highland Avenue, where they were met by 34-year-old Robert Beck.(Wapbaze_Copyright)

According to police, Beck informed the officers that he had shot someone and was the one who called 911 to report the shooting.(Wapbaze_Copyright)

Upon entering the house, police found the victim, identified as 51-year-old Brian Eccles, suffering from gunshot wounds to his chest and left arm.(Wapbaze_Copyright)

Beck's wife, Jodi Beck, 35, and the couple's two children, ages 7 and 11, were also present inside the home at the time of the incident.(Wapbaze_Copyright)

Responding officers administered first aid to Eccles until paramedics arrived and transported him to Marion General Hospital. He was later airlifted to a hospital in Fort Wayne in critical condition.(Wapbaze_Copyright)

During the investigation, police learned that Robert and Jodi Beck had separated earlier in the day.(Wapbaze_Copyright)

The jilted husband had left the couple's home, then returned later to find Eccles in the bedroom with his estranged wife.(Wapbaze_Copyright)

'A confrontation occurred and Beck shot Eccles with a .380 caliber handgun,' according to a press release from the police.(Wapbaze_Copyright)

Officers on the scene recovered the weapon and arrested Beck on a charge of felony aggravated battery. His bond was set at $30,005.