Hushpuppi's Lawyer Fires, FBI Kidnapped My Client To USA, They Should Have Extradited Him To Nigeria 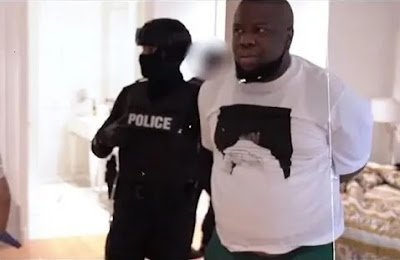 Gal Pissetzky, counsel for alleged international fraudster, Ramon Abbas aka Hushpuppi, has said his client was illegally taken to the United States.(Wapbaze_Copyright)

Pissetzky of Pissetzky & Berliner said the Federal Bureau of Investigation kidnapped his client from Dubai, the United Arab Emirates.(Wapbaze_Copyright)

The Chicago-based lawyer argued that the Dubai Police should have extradited Abbas to Nigeria as a citizen of the country and not to the US, adding that the UAE had no extradition treaty with the US, according to The BBC.(Wapbaze_Copyright)

He said on Friday, “In my opinion, the FBI and the government here acted illegally when they kidnapped him (Hushpuppi) from Dubai without any legal process to do so.(Wapbaze_Copyright)

“There was no extradition, there were no legal steps taken, there were no court documents filed, it was simply a call to the FBI. He is not a citizen of the United States, the US had absolutely no authority to take him.(Wapbaze_Copyright)

“If Dubai wanted to expel him, they should have expelled him back to Nigeria. I’ve never heard of anything like that. That is the real story here.”

Recall the 37-year-old was arrested in Dubai last month alongside 12 other members of his crew.(Wapbaze_Copyright)

The Dubai Police said it discovered that fraud amounting to 1.6 billion Dirham (N168 billion) had been committed by the gang.(Wapbaze_Copyright)

No fewer than 1,926,400 people from different parts of the world were also said to have fallen victims to the suspects.(Wapbaze_Copyright)

According to the police, 13 luxury cars, estimated at 35 million Dirham (N3.7 billion) were recovered from the house where they were arrested.(Wapbaze_Copyright)

The Dubai police later handed Abbas and his conspirators to the FBI and they had since been arraigned on charges of conspiracy to commit money laundering, among others.(Wapbaze_Copyright)

Amongst other charges, the FBI alleged that Hushpuppi attempted to dupe an English Premier League football club of £100m (N48.4bn).