Inside Story Of The Cold War Within Oniru Royal Family 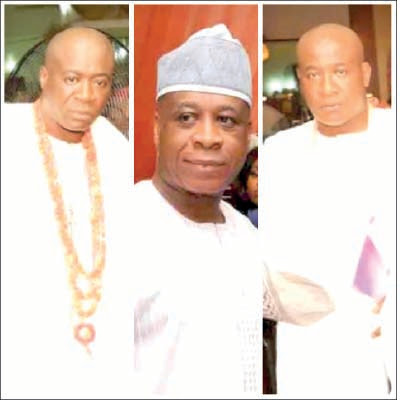 There is the popular African proverb that says that when brothers fight to death, a stranger inherits their property. This powerful axiom could best illustrate what might likely be happening to one of Lagos’ popular families: Abiodun-Oniru siblings.(Wapbaze_Copyright)

For some time now, the story of the three sons of late Oba Idowu Abiodun Oniru, the immediate past Oniru of Iruland, an upscale community in Lagos State —Adesegun, Tijani and Demola— has been one of the most-talked about by many in the state.(Wapbaze_Copyright)

The fourth is Olumide, quiet but also a suave looking dude like his older siblings. Just as the gist around them gains traction on the traditional media, they are also a staple on social media.(Wapbaze_Copyright)

The conversations around the Oniru brothers became a matter of public interest soon after their monarch father joined his ancestors in September 2019.(Wapbaze_Copyright)

Spotlight gathered that shortly after the passing of the late Oba Oniru, some sort of hushed smouldering ‘war’ ensued among the three brothers over who would have emerged the successor to the throne. Adesegun, a former Lagos State Commissioner for Waterfront Infrastructure Development, is the first son of the late monarch. He is quite rich and also close to the seat of power in the state. His immediate younger brother, Tijani, on the other hand, was also very popular and well-loaded.(Wapbaze_Copyright)

Aside from being the Oluwo Ejiwe of Iruland, (the agbo elegba title) he was very close to the other White Cap chiefs as well as other indigenes of the community. He is described as a great benefactor to many in the area.(Wapbaze_Copyright)

The third Oniru brother, Ademola, who relocated from the United States some few years ago to manage popularly Oniru Beach, was also said to have made subterranean moves to realise his dreams of succeeding their father.(Wapbaze_Copyright)

It was gathered that the silent battle for the throne was so intense that when Adesegun, who was then the Aremo of Iruland, was picked by the Akiogun branch of Iru royal family as their candidate to fill the then vacant stool, Tijani and Ademola were allegedly not happy for their elder brother’s choice. Not even the intervention of their respective family heads could make them close ranks.(Wapbaze_Copyright)

However, their individual ambitions were said to have led to a series of intrigues, horse-trading and backbiting that later exploded in their faces as they all lost out completely in the bid to ascend the throne.(Wapbaze_Copyright)

A source revealed that their inability to form a united front against their opponents, but blinded by their individual ambition paved the way for the emergence of ex-cop and former Lagos Commissioner, Oba Omogbolahan Abdulwasiu Lawal —from Abisogun branch of Iru Royal Family—whom many never considered a top choice for the throne. Consequently, the trio has been reportedly silently licking their wounds and are now forced to bear the brunt of latest changes in the administration of the rich community.(Wapbaze_Copyright)

Given the elitist nature of the kingdom as an upper crust community comprising Iru and Victoria Island —a prime real estate domain in Lagos State, sources said it’s understandable why the Oniru Brothers were desperately scheming to succeed their deceased father.(Wapbaze_Copyright)

But like they used to say, people fight realities in different ways but for Adesegun, the eldest of the Oniru brothers, it appears the reality is just settling in that not only is he no longer the Aremo to the throne, but he isn’t the man chosen for the throne.(Wapbaze_Copyright)

A source told Spotlight that during the reign of their father, Adesegun and his siblings and their friends lived like kings. They lived life to the very hilt, a life of opulence and royalty, with undisguised disdain for the indigenes and residents of the kingdom.(Wapbaze_Copyright)

Even the other princes and princesses of the other royal families were seen as lesser beings to the sons and daughters of the then reigning king, this particular perception of the other princes may just be the reason Tijani Oniru could raise his hands to slap Prince Murisiku Ajasa, a fellow prince of the Kingdom on official duties from the palace last weekend.(Wapbaze_Copyright)

The unfortunate face-off between Prince Murisiku and Prince Tijani ultimately led to the invasion of the Oniru Palace on Sunday, July 5 in the company of some policemen. It is important to note that the face-off between Tijani Oniru and some members of the enumeration committee led by Prince Murisiku on the duty of enumerating the property of the kingdom on the instruction of the new Oniru, Oba Lawal has been described as excessive power taken too far.(Wapbaze_Copyright)

Palace source said there are no malevolent intentions to the ongoing enumeration exercise being carried out by the new Oniru as it’s for the benefit of all the three branches of the royal families —the Akiogun, Abisogun and Ogunyemi families. Thus the sons of the former Oniru have been enjoined to accord the new custodian of their heritage the deserved respect and to conduct themselves in manners consis