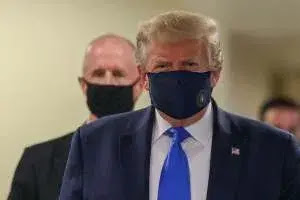 United States President Donald Trump finally yielded to pressure and wore a face mask in public for the first time on Saturday as the US posted another daily record for coronavirus cases, while Disney World reopened in a state hit hard by the pandemic.(Wapbaze_Copyright)

White House experts leading the national fight against the contagion have recommended wearing face coverings in public to prevent transmission of the illness.(Wapbaze_Copyright)

But Trump had repeatedly avoided wearing a mask, even after staffers at the White House tested positive for the virus and as more aides have taken to wearing them.(Wapbaze_Copyright)

Hours after the World Health Organization urged countries to step up control measures to rein in the disease, Trump donned a dark mask bearing the presidential seal as he visited wounded military veterans at the Walter Reed military hospital in a suburb outside Washington.(Wapbaze_Copyright)

“I’ve never been against masks but I do believe they have a time and a place,” he told reporters as he left the White House.(Wapbaze_Copyright)

Trump is trailing Democrat Joe Biden in the polls ahead of a November election and surveys show most Americans are unhappy with how he has handled the public health crisis.(Wapbaze_Copyright)

But the president has continued to praise his own response to the pandemic despite a cascade of figures showing the extent of the disease’s spread across the United States.(Wapbaze_Copyright)

The country posted yet another daily record of confirmed cases on Saturday night, with 66,528 new infections, while the death toll rose by almost 800 to nearly 135,000.(Wapbaze_Copyright)

In Florida, where nearly one in six of those new infections were recorded, the Walt Disney World theme park partially reopened after four months of shutdown prompted by the virus.(Wapbaze_Copyright)

Hundreds of people queued to enter the park in Orlando, some sporting Mickey ears but all wearing face masks, with social distancing and other hygiene precautions also in place.(Wapbaze_Copyright)

Days earlier, top US infectious disease expert Anthony Fauci said that Florida had begun reopening before meeting the criteria that would have enabled it to do so safely.(Wapbaze_Copyright)

The coronavirus pandemic has infected nearly 13 million people, killed over 560,000 and triggered massive economic damage since the disease was first detected in China late last year.(Wapbaze_Copyright)

The United States is the country worst hit by the illness, followed by Brazil — which surpassed 70,000 deaths on Friday.