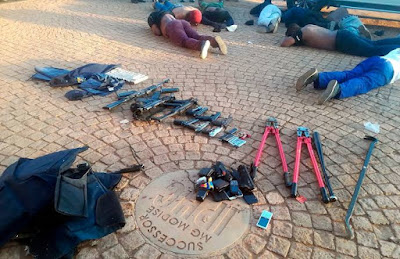 At least five people were killed and 40 others, including off-duty police officers, arrested Saturday after gunmen stormed a South African church, reportedly over a leadership dispute, the national police commissioner said.(Wapbaze_Copyright)

According to a statement by South Africa’s top cop, General Khehla John Sitole: “Four people were found shot and burnt to death in a car while a fifth victim, a security guard, was also fatally shot in his car while he was apparently attending this complaint.”

The unusually violent incident took place early Saturday when an armed group stormed the International Pentecostal Holiness Church in Zuurbekom, on the western outskirts of Johannesburg, “indicating that they were coming to take over the premises,” police said.(Wapbaze_Copyright)

The church has had multiple succession-related clashes that have been widely reported by local media since multimillionaire leader and founder Comforter Glayton Modise died in 2016.(Wapbaze_Copyright)

Sitole said police responded to reports of “shooting and an alleged hostage situation,” and seized more than 34 firearms including five rifles, 16 other guns and 13 pistols.(Wapbaze_Copyright)

“I am certain that the speedy response by the joint security forces has averted what could have been a more severe blood bath”, Sitole said.(Wapbaze_Copyright)

More than 40 suspects, including six taken to hospital, were arrested.(Wapbaze_Copyright)

They included members of the South African police, the National Defence Force, the Johannesburg Metro Police, and the Department of Correctional Services.(Wapbaze_Copyright)

However, Brigadier Vishnu Naidoo said that the law enforcement officers arrested were worshippers that got caught up in the clashes.(Wapbaze_Copyright)

“They were arrested in their capacity as church members, not as officers,” Naidoo told AFP.(Wapbaze_Copyright)

The police commissioner said authorities are investigating “the possibility that this attack may have been motivated by a feud between conflicted parties of the church,” which is used to factional struggles.(Wapbaze_Copyright)

Local media reported that in November 2018, a shoot-out between opposing sides wounded three people outside the church headquarters in Zuurbekom.(Wapbaze_Copyright)

In 2017, the warring factions went to court over claims that more than R110 million ($6.5 million) was missing from church coffers.(Wapbaze_Copyright)

Believed to be South Africa’s second largest church group, it is estimated to have at least 1.5 million members according to the financial services group Sanlam.