Once Sold For $56, Chinese Vase Found In A Pet-filled House Goes For $9M 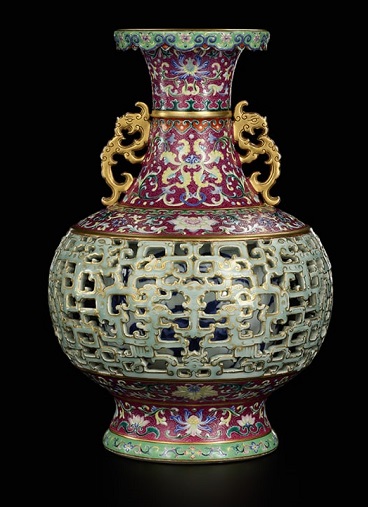 A long-forgotten Chinese vase, once sold at auction for just £44 ($56), went under the hammer for over 70 million Hong Kong dollars ($9 million) on Saturday after being discovered in an elderly woman's country home.(Wapbaze_Copyright)

Described by Sotheby's as a "lost masterpiece," the rare 18th-century artifact spent the last 50 years in a remote house in central Europe surrounded by the owner's pet cats and dogs, according to the auctioneer.(Wapbaze_Copyright)

The highly unusual vase -- in which a blue-and-white floral design is visible through the object's lattice-like body -- was made specifically for the Qianlong Emperor, who ruled China for more than 60 years.(Wapbaze_Copyright)

"It is a miracle that this extraordinarily fragile vase survived half a century in a home surrounded by countless pets," said chairman of Sotheby's Asia, Nicolas Chow, in a press statement prior to the sale.(Wapbaze_Copyright)