19 Killed At A Wedding After-party In Kaduna 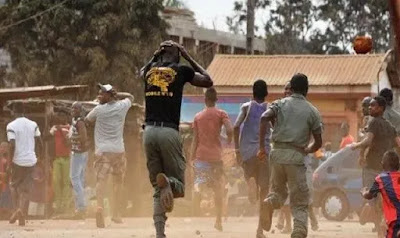 At least 19 persons have reportedly been killed in an attack by unknown gunmen at Kukum Daji village in Kaura Local Government Area of Kaduna State.(Wapbaze_Copyright)

The gunmen reportedly stormed the village at about 10:30pm during a wedding after-party on Sunday night July 19 and opened fire on the guests.(Wapbaze_Copyright)

“The attackers were heavily armed. 17 people died instantly from gunshots. 32 other people who sustained various degrees of injury were rushed to the hospitals, but unfortunately, two of them died in the hospital.(Wapbaze_Copyright)

As I speak, some of the villagers are still missing and we don’t know their state. We cannot even search deep into the bush because security agents not been deployed to the community yet.”

Also confirming the incident, the spokesperson of the Kaduna state police command, ASP Muhammad Jalige, said the number of causalities is yet to be ascertained but that the entire area has been fortified.(Wapbaze_Copyright)