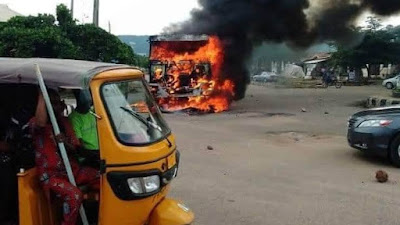 Tragedy struck Tuesday morning when a truck belonging to Dangote Cement Company, Obajana, crushed to death a man and his son

According to an eye witness account, the middle-aged man was on his motorbike with his two sons when the truck driver suddenly lost control of the vehicle and veered into another lane, resulting in an accident which killed the man and his two sons

The man, who was said to be heading to the farm with two of his sons, was said to have been dragged by the truck on the highway before he was later crushed with his brain scattering on the busy road.(Wapbaze_Copyright)

One of the children who was carried behind the motorbike was also said to have died instantly while the other one managed to escape but with serious injuries.(Wapbaze_Copyright)

The Kogi State Police Command, confirming the incident, said that the truck lost control at the zone 8 roundabouts and crushed a pedestrian and injured one other person who is currently receiving treatment at the hospital.(Wapbaze_Copyright)

The Police Public Relations Officer, Willy Aya, who spoke to our correspondent on phone said that the incident made the people on the area to take the law into their hands and set the truck ablaze.(Wapbaze_Copyright)

He promised a full-scale investigation into the matter even as he urged members of the public to stop taking laws into their hands.