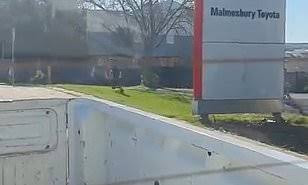 Nearly 70 inmates staged a brazen escape from a detention centre in South Africa’s wine-producing town of Malmesbury on Friday after overpowering guards, before most were re-arrested, the government said.(Wapbaze_Copyright)

The inmates, who were awaiting trial, broke out around midday during routine physical exercise at the facility situated about 65 kilometres (40 miles) north of Cape Town, the Department of Correctional Services said in a statement.(Wapbaze_Copyright)

“The escapees overpowered officials, took the keys and locked three officials in a cell and opened other cells before escaping through the main entrance and over the roof,” it said.(Wapbaze_Copyright)

Police immediately launched a manhunt and re-arrested 61 of the 69 escapees.(Wapbaze_Copyright)

The centre was holding 451 offenders and there were 20 officials on duty at the time of the incident in the town surrounded by wheat and wine farms.