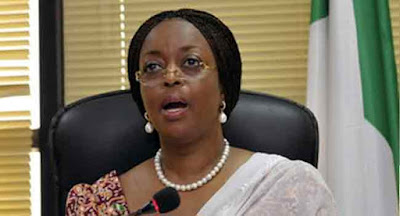 A Federal High Court in Abuja has ordered a former Minister of Petroleum Resources, Diezani Alison-Madueke, to appear before it for an arraignment on money laundering charges filed against her by the Economic and Financial Crimes Commission.(Wapbaze_Copyright)

Justice Ijeoma Ojukwu made the order in a ruling on an ex parte application shortly after it was moved by the lawyer to the anti-graft agency, Mr. Faruk Abdullah.(Wapbaze_Copyright)

The judge ordered the defendant, who is alleged to have escaped to the United Kingdom after leaving office in 2015, to appear in court to answer 13 counts of money laundering involving $39.7m and N3.32bn said to be proceeds of unlawful activities.(Wapbaze_Copyright)

Justice Ojukwu, in her ruling, ordered that the court summons be published on the website of the EFCC and a national daily in a conspicuous manner.(Wapbaze_Copyright)

The judge adjourned the case till October 28 for the defendant’s arraignment.(Wapbaze_Copyright)

In the application, the anti-corruption agency stated it had made futile efforts to question the former minister on her role in the award of Strategic Alliance Agreement to Septa Energy Limited, Atlantic Energy Drilling Concept Limited and Atlantic Energy Brass Development Limited by Nigerian National Petroleum Corporation.(Wapbaze_Copyright)

The commission also said it sought to question her role in “the chartering of private jets by the Nigerian National Petroleum Corporation and Ministry of Petroleum Resources and her role in the award of contracts by NNPC to Marine and Logistics Services Limited.”

It added that it needed to question her on “her role in financing the 2015 general elections, particularly the money that were warehoused at Fidelity Bank Plc in 20015 prior to the elections.”

The EFCC said it equally wanted the ex-minister to speak on several items, documents and jewelleries recovered from her house at No: 10 Chiluba Close off Jose Marti Street, Asokoro, Abuja, and some identified properties that are linked to her’ In Nigeria, UK, United States of America (USA), United Arab Emirate (UAE) and South Africa.(Wapbaze_Copyright)

The EFCC had on November 11, 2018, filed the 13 counts of money laundering accusing Diezani of unlawfully taking into her possession, the sums of sums of $39.7m and N3.32bn when she reasonably ought to have known that the money formed part of the proceeds of unlawful activities.(Wapbaze_Copyright)

She was said to have purchased choice landed assets with the money using different fronts as the owners.(Wapbaze_Copyright)

In September 2013, she allegedly used the name of Rusimpex Limited to acquire a property named Block B3 comprising of six penthouses and 18 flats at Zone N Federal Government Layout, also known as Bella Vista Estate, Banana Island, Ikoyi, Lagos, with the sum of $37.5m.(Wapbaze_Copyright)

On June 4, 2012, she was said to have used the name of Azinga Meados Limited to buy 13 three-bedroom terrace houses with one room maids’ quarters at Mabushi Gardens Estate, Abuja, with the sum of N650m.(Wapbaze_Copyright)

She was also said to have in May 2012, purchased in the name of Blue Nile Estate Limited, 16 four-bedroom terrace houses, at Plot 2C, Omerelu Street Diabu GRA, Port Harcourt Rivers State, with N928m.(Wapbaze_Copyright)

She was also said to have in January 2011 bought in the name of Vista Point Company Limited, six flats of three-bedrooms with one boys’ quarters each, lawn tennis court, Gym, garden and appurtenances, at 135 Awolowo Road/Bourdillon Road, Ikoyi, Lagos State, with N805m.(Wapbaze_Copyright)

The ex-minster was also said to have in December 2011, bought in the name of Sequoyah Properties Limited a property at 12, Forces Avenue, Old GRA, Port Harcourt measuring 4,890 square meters with $2.2m.(Wapbaze_Copyright)