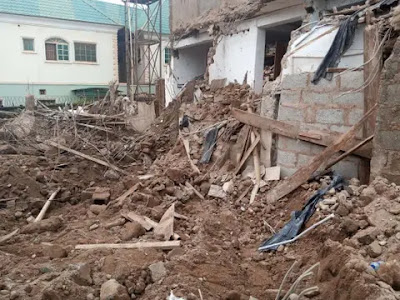 The Federal Capital Territory Administration FCTA has vowed to file a charge of manslaughter against the owner of a building in Dawaki which collapsed on Friday, killing one and injuring nine.(Wapbaze_Copyright)

This was as the Administration said it would activate the relevant sections of the law to revoke the land title and withdraw the building plan permit earlier issued to the developer.(Wapbaze_Copyright)

Acting Coordinator of the Abuja Metropolitan Management Council AMMC, Abdulhamid Suleiman disclosed this on Sunday when he led journalists on a tour of the collapsed structure.(Wapbaze_Copyright)

Describing the incident as “very painful and unfortunate”, Suleiman stated that “the developer and his co-conspirators will be punished. I assure you, the FCTA is not going to tolerate it. They will be brought to book and we will recommend for possible revocation of this plot.”

Suleiman lamented that even though necessary preventive measures were taken and a ‘stop work’ notice by the Department of Development Control served on the developer, he ignored it and used the cover of the Covid-19 lockdown “to continue to do this type of construction under lawlessness and impunity, and the result is this disaster.”

According to him, the prosecution of the developer and revocation of the plot would also “serve as a warning to other developers in the city, adding that “we have directed the Department of Development Control to institute, strictly, their procedure: any developer issued stop-work order that refuses to abide by it, we will withdraw his building plan and approval and possibly recommend, also, for the withdrawal of the title of the land.(Wapbaze_Copyright)

“We have also directed the Legal Department to commence the process of prosecuting those who are responsible for this terrible offence.”

Director-General, FCT Emergency Management Agency FEMA, Abbas Idriss while commenting said there were 10 persons in the building when it collapsed but that while nine were safely evacuated, there was one fatality.(Wapbaze_Copyright)

Speaking on steps taken to prevent the collapse, Director, Department of Development Control, Mukhtar Galadima dismissed allegations of being reactive instead of proactive, revealing that prior to the collapse, his department organized a stakeholders’ meeting to “strategise on ways and means of averting incidences of structural failure.”

Galadima further disclosed that a “stop work” notice was served on the developer of the collapsed structure on 17th of July, 2020 when the developer embarked on modification of the bungalow without securing appropriate approval, but he did not heed the orders”.(Wapbaze_Copyright)

According to Galadima, the developer “took advantage of the break period during the weekend, commence work and the result of noncompliance with our notice is this unfortunate incident that occurred yesterday.(Wapbaze_Copyright)

“It is really unfortunate that we are recording building collapse during this critical period in our nation’s history. That is why we try as much as possible to see what we can do, in collaboration with other stakeholders to avert building collapse.”

Director, Abuja Environmental Protection Board AEPB, Baba Shehu Lawan while speaking specifically on the Gwagwalada flood, urged residents to stop dumping refuse into drainages as it was such practice that blocked the drainages and result into Saturday’s flooding which affected some parts of the territory.(Wapbaze_Copyright)

Lawan also warned against indiscriminate felling of trees by residents and developers for development purposes, explaining that the trees served as vegetation cover and help to protect the soil.