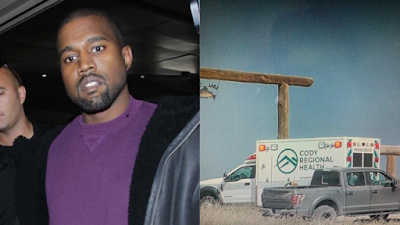 Kanye West spent time at a hospital close to hear his Wyoming ranch on Saturday before an ambulance showed up at his property later in the day according to report by The Mirror.(Wapbaze_Copyright)

The rapper entered the E.R. door of the hospital in Cody on Saturday afternoon where he stayed for around 10 minutes before leaving.(Wapbaze_Copyright)

Kanye then returned to his ranch and a short time later an ambulance was pictured arriving on his land. Hours before then, the rapper issued a public apology to his wife Kim Kardashian over his explosive comments about their marriage.(Wapbaze_Copyright)

In the past week, Kanye has gone a series of late-night Twitter tirades where he’s made digs at Kim and her famous family.(Wapbaze_Copyright)

Before his hospital visit, Kanye returned to social media and said that he was sorry for airing their private business and admitted he knew it had hurt her:

I would like to apologize to my wife Kim for going public with something that was a private matter. I did not cover her like she has covered me. To Kim I want to say I know I hurt you. Please forgive me. Thank you for always being there for me.(Wapbaze_Copyright)

Kanye, who is hoping to be elected as the next president of America in November, has been worrying fans, over the past weeks, by penning and posting a number of erratic messages on Twitter.(Wapbaze_Copyright)

One included him claiming that his wife Kim tried to get doctors to lock him up amid fears he’s in the middle of a serious bi-polar episode.(Wapbaze_Copyright)

In another of his now-deleted tweets, the Yeezy brand owner claimed that he has been trying to end his marriage with reality TV star Kim after she met with musician Meek Mill at a hotel to discuss prison reform.(Wapbaze_Copyright)

The online rant came after the musician and designer reportedly caused an uproar in the Kardashian family when he dropped the bombshell his wife considered aborting North during his presidential rally last weekend.(Wapbaze_Copyright)

Kim Kardashian later addressed the outburst on her Instagram story on Wednesday, she called for compassion and asked that the public respect the family’s privacy as Kanye West deals with bipolar disorder.