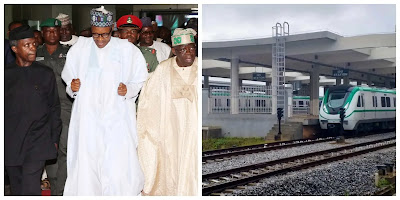 President Muhammadu Buhari has named train stations along the Lagos-Ibadan and the Itakpe-Ajaokuta-Warri corridors after “deserving Nigerians”, the Minister of Transportation, Rotimi Amaechi, has said.(Wapbaze_Copyright)

Presidency aide, Tolu Ogunlesi, revealed this on Monday in a tweet.(Wapbaze_Copyright)

According to Ogunlesi, the Apapa station was named after Bola Ahmed Tinubu, while the Agege station was conferred on the Minister of Works and Housing, Babatunde Fashola.(Wapbaze_Copyright)

President @MBuhari has approved the naming of some railway stations along the Lagos-Ibadan and the Itakpe-Ajaokuta-Warri corridors after deserving Nigerian citizens. — HM @ChibuikeAmaechi #Thread— tolu ogunlesi (@toluogunlesi) July 27, 2020

Earlier in June, the President had approved the naming of the Railway Complex in Agbor – the operational hub of the Itakpe-Warri line – after former President Goodluck Jonathan.(Wapbaze_Copyright)

According to a statement from the Ministry of Transportation, Buhari conferred the names on the “deserving citizens” because of their contribution to “the progress and development of their respective communities and the nation at large.”

Below is a full list of the Nigerians who were conferred with names of train stations: