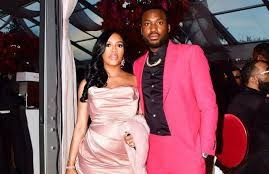 Meek Mill revealed on Sunday that he and girlfriend Milan Harris have broken up, just a few days after Kanye West insinuated Meek and Kim Kardashian had an affair.

The now-ex couple welcomed their first child together — a baby boy — on the rapper’s 33rd birthday in May.

Meek, who also has two other children from previous relationships, announced the split on social media.

The 24/7 artist tweeted: “We me and Milano decided to remain friends and build our child as separate parents.

“We still have mad love for each other but we both came to a understanding!"

Meek, who was released from jail in 2018 after five months, added: “I made a lot of paper last year, everything got different with a lot people I helped so I gotta revaluate myself!

“It will happen to anybody with success & power grow, stay strong and move forward!”

This break-up comes on the heels of Kanye’s tweets about his wife Kim Kardashian and Meek’s time together at a 2018 event.

After claiming at his first campaign event that he and his wife almost aborted daughter North, Kanye went on a Twitter rampage where he suggested Meek and Kim might’ve gotten too friendly with one another a couple of years ago.

The 43-year-old father of four tweeted: "I been trying to get divorced since Kim met with Meek at the Waldorf for 'prison reform.’”

He appeared to give his friend a pass on the alleged situation, though, adding: ”Meek is my man and was respectful. That’s my dog.

“Kim was out of line. I’m worth 5 billion dollars and more than that through Christ.”