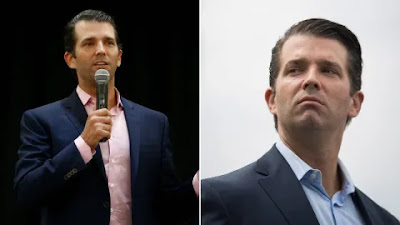 Donald Trump Jr has been banned from using Twitter for allegedly spreading lies about coronavirus.(Wapbaze_Copyright)

The President of the United States’ eldest son had his account suspended Wednesday, after the social media giant said he had been posting ‘misleading and potentially harmful information’ about Covid-19.(Wapbaze_Copyright)

Don Jr, 42, was suspended for sharing a tweet from Houston-based Doctor Stella Immanuel that falsely claimed anti-malaria drug hydroxychloroquine is a cure for Covid-19. Immanuel wrote: ‘Covid has cure. America wake up.’

The Texas doctor – who claims some illnesses are caused by having sex with demons and witches – has shared multiple other tweets identifying that cure as hydroxychloroquine.(Wapbaze_Copyright)

Donald Trump Sr also retweeted the same post. It has since been removed from his timeline from Twitter, although the president can still tweet, and his account has not been suspended. Twitter bosses previously indicated Trump would be allowed to tweet even if he broke the social media network’s own rules because of his position as president.

President Trump boasted of taking the drug as a preventive measure in May, despite scientific studies showing it could kill people who take it for coronavirus. Doctors issued stern warnings urging Americans not to take hydroxycholorquine in the wake of Trump’s revelation.(Wapbaze_Copyright)

The banned tweet was replaced with a text box saying ‘This tweet is no longer available.’Trump spent much of Monday tweeting about the wonders of anti-malarial drug hydroxychloroquine, which he and Dr Immanuel have both touted as a potential coronavirus cure.(Wapbaze_Copyright)

President Trump has faced mounting criticism over his handling of the coronavirus outbreak, which has seen close to 4.4million Americans diagnosed with Covid-19, and 150,000 so-far killed. Last week, he admitted to Barstool Sports that he often retweets information without checking it properly, and says it is these retweets which have gotten him in the most trouble.