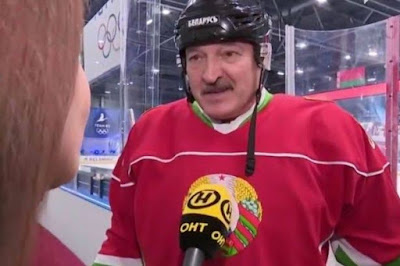 "Today you are meeting a man who managed to survive the coronavirus on his feet. Doctors came to such a conclusion yesterday. Asymptomatic," Lukashenko said during a meeting with members of the military, Reuters reported.(Wapbaze_Copyright)

Lukashenko, who's ruled in Belarus for 25 years and is often referred to as Europe's "last dictator," has pushed against imposing any restrictions to prevent the spread of COVID-19 and previously dismissed fears over the pandemic as a "psychosis."

The Belarusian leader also suggested that people drink vodka and go to the sauna to stay healthy and stave off the virus.(Wapbaze_Copyright)

Lukashenko has frequently been criticized for human rights abuses, particularly over the harassment of civil society activists and independent media. Belarus is also the only European country that continues to employ the death penalty.(Wapbaze_Copyright)

He has faced mass protests this summer after political rivals were jailed and his main opponents were barred from running in Belarus's upcoming presidential election on August 9. One of the opponents, Viktor Babaryko, was arrested in June and remained behind bars as of mid-July, according to Russian media reports. The other, Valery Tsepkalo, fled to Russia over fears for his freedom.