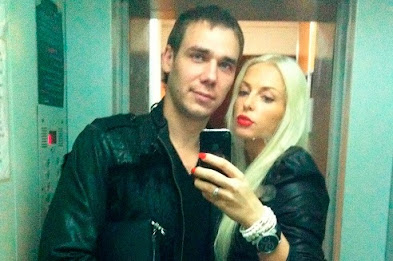 A Russian boxer and a female world champion kickboxer were caught on video in a fight with a disabled man which led to the death of a passerby who tried to be a "good samaritan" by stopping the brawl.

Mikhail Startsev, 38, and kick boxer Liliya Vorogushina, 37, have been accused of beating a man who needed a walking stick.

Married father of three Pavel Pokhlov, 40, was passing by with his wife after a night out and "tried to intervene to stop the fight" in Siberian city Barnaul.

In the footage, Startsev appears to haul the disabled man to the ground while Vorogushina "aims kicks at the man's head", said a state media report.

The boxer and kickboxer with a female companion are seen restraining the helpless man on the ground in a martial arts-type submission hold, it is alleged.

It is further alleged that as Vorogushina kicked him, Pokhlov intervened to try and stop the blows. He struck the former world champion kickboxer sending her stumbling on the ground.

Boxer Startsev was then seen landing a fatal blow to Pokhlov after which he fell striking his head on the pavement, it is alleged. 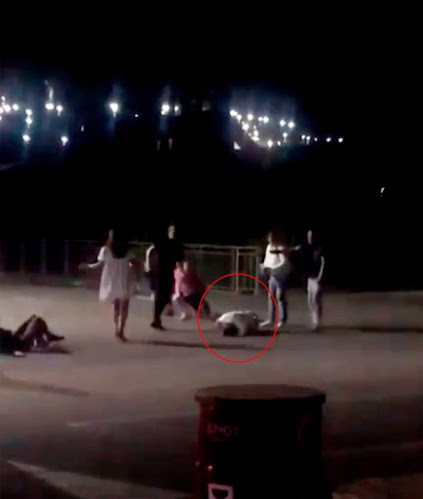 He and Vorogushina then returned to beating the man who was disabled from a car crash injury, it is claimed.

Pokhlov died on the spot from "traumatic subarachnoid haemorrhage", according to Russian law enforcement.

The dead man's widow Svetlana, 31, who was injured in the fracas, hit out at the "scum" who attacked a helpless man, and branded the boxer an "animal".

"Thanks to this animal, my beloved husband and father of three children no longer exists," she said. 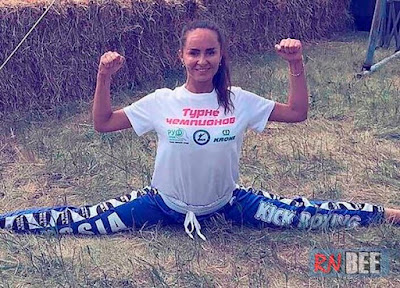 He was a "kind and sympathetic person who could not pass by when a disabled person was beaten".

The man "had a walking stick in his hand, he was just trying to push away these scum.

"My Pasha (Pavel) came to his aid. He wanted to separate them.

"But Vorogushina, a master of sports in kickboxing, with her friend started jumping and beating us.

"Then there was this fateful blow..... and instant death." 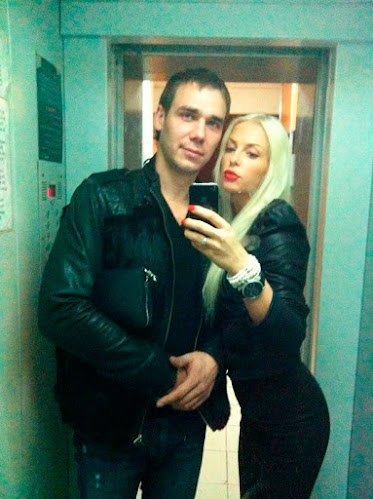 Startsev was detained and is due to be charged with causing death by intentional infliction of grievous bodily harm.

No action has been announced so far against Vorogushina or her friend but a criminal investigation is underway.

The grieving widow has demanded the kick boxer is made an accomplice.

She claimed that the influential fighting pair are seeking help from Russian political friends to lessen any charges.

"Let this filth get a well-deserved 15 years of jail," she said of Startsev.

Vorogushina, now a referee but formerly a two-times world champion and four-times Russian champion, said later that the disabled man was "aggressive" and had hit her female friend with his stick.

Pokhlov "hit me in the face. I fell on my back and lost consciousness for a few seconds," she said.

"Mikhail hit Pavel trying to protect me, Pavel fell down and then died....

"I do not justify his actions, they caused the death of man, but he was acting to protect me...

"I'm sure, Mikhail did not want to kill or even injure the victim." 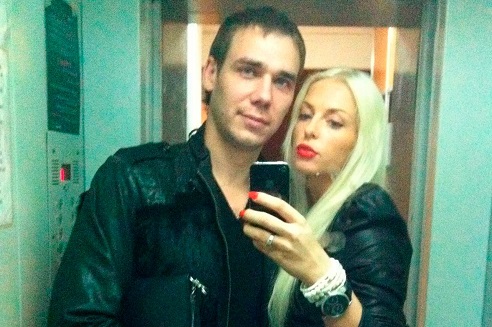