Why Ajimobi’s Widow Was Angry With Govt — Oyo Deputy Gov 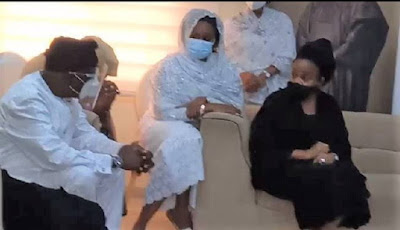 Oyo State Deputy Governor, Mr Rauf Olaniyan, has explained the reason for the anger displayed by Mrs Florence Ajimobi, widow of former Governor Abiola Ajimobi, during the burial of her husband.

The deputy governor said this in Ibadan on Saturday when the leadership of the South-West Group of Online Publishers paid him a Sallah visit.

Olaniyan said he knew the widow was grieving, insisting that he was not angry with her.

He said he had nothing against the family, adding that the widow had called him and they had settled everything.

The deputy governor’s convoy was denied entry at the residence of Ajimobi during the eight day prayer for the deceased.(Wapbaze_Copyright)

The widow also spoke angrily to the deputy governor when he and some governors went to condole with her at her residence.

But commenting on the incident, Olaniyan stated, “I was not angry with Mrs Ajimobi and the family. I had no premonition that something like that was going to happen.

“I cautioned the ADC and Chief Detail after we got there that nobody must be touched. I told them to keep their heads when others were losing theirs.

“She ( Mrs Ajimobi) has called and we have settled everything. I understand her, she was grieving, mourning the death of her husband. We don’t know the enormity of that grief.”