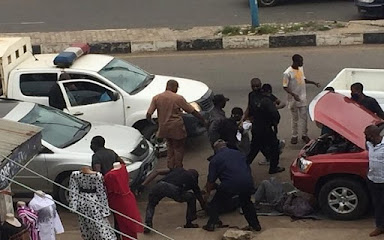 A leader of the Revolution Now in Osun State, Olawale Bakare and others have been arrested by operatives of the Department of Secret Service (DSS) during a protest today in Osogbo demanding a better governance from the government.

Bakare and other members of the movement numbering about six were arrested while they were addressing journalists at a popular junction, Ola-Iya.

The protesters who were armed with placards with several inscriptions against bad governance, lack of infrastructure, extrajudicial activities and others were arrested in the presence of policemen.

Other members who were on the scene ran away to avoid arrest.