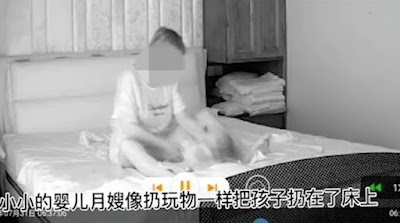 A cruel nanny was caught on camera abusing a couple's six-day-old baby boy and throwing him around 'like a toy'.

The 26-year-old father, Mr Tian, came to the shocking discovery last week while watching security footage on his phone, he told police in China.

The domestic worker, 50, has been accused of slapping, hitting and throwing the newborn child.

The boy's mother claimed her nanny had handled her child violently while looking after him at their home in the city of Shahe in northern China's Hebei province.

She added the worker had been caught beating her son in the past.

One clip, filmed on July 31, shows the worker putting the boy onto the bed roughly in the morning, according to a trending post.

Another section, taken on the same day, apparently shows her hitting the crying boy in the early hours.

In a third video from August 1, the carer appeared to be putting the baby to sleep impatiently.

Police launched an investigation into the case after the video went viral on Monday.

According to a police statement, Mr Tian claimed to have seen Ms Wang whacking her son's hands, feet and buttocks on camera.

He said he was watching home surveillance footage through a mobile app at around 6pm on Saturday.

Mr Tian argued with Ms Wang the same day. The next day he went to her agency with his elder brother to complain about her service.

The two parties had an altercation outside the company.

Police said when Ms Wang tried to drive her car and leave the scene, an enraged Mr Tian used tools to wreck Ms Wang's car, causing the latter to be frightened and sent to a hospital.

Officers said they were carrying out further investigations. They noted that they were treating the incident as an administrative case.