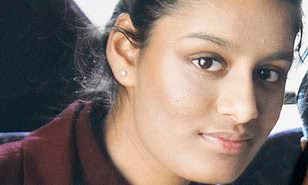 The security risk posed by female ISIS recruits is being 'underestimated' due to gender stereotyping, the head of the UN's counter-terrorism body has said.

Michele Coninsx warned that security services often see female terrorists only as 'victims' and called for a more 'nuanced' approach to dealing with them.

It comes as Shamima Begum, a British 'jihadi bride' who fled her family home in east London in 2015 to join ISIS in Syria, fights to return to the UK so she can stand trial.

Begum, who married an ISIS fighter and had three children by him, was reportedly a member of ISIS's armed military police and enforced its strict sharia laws.

She insists that she did not take part in any violence.

A report by the agency that Ms Coninsx runs - the Counter-Terrorism Committee Executive Directorate - warned that some UN member states are failing to properly investigate the roles played by women in ISIS.

While many female recruits are victims of the terror cult, it is possible to hold 'simultaneous roles as supporters and victims', the report said.

Those who joined ISIS's so-called caliphate in Syria had 'supported and facilitated war crimes and terror attacks', the report added.

Women's role in violence - including beheadings, mutilation and stoning - is often ignored, the report warned, partly because of how ISIS itself views women.

'While women are often active as online propagandists and recruiters, their involvement in other types of activities, including violence, was less prominently documented online because of ISIS's restrictive gender norms,' the report said.

Ms Coninsx echoed the report's findings in an interview with The Independent, saying that research into women's roles in ISIS lags far behind that of men.

And, what little research has been done in recent years has often not been fed into practice by security services, she said.

'While there is a growing awareness among policymakers and practitioners that more attention must be paid to women in a counterterrorism context, gender biases unfortunately continue to persisted,' she added.(Wapbaze_Copyright)

Around 900 Britons are though to have left the UK to join ISIS in Syria and Iraq between 2014, when the terror group began capturing territory, and 2019, when its 'caliphate' collapsed.

It is not clear how many of those recruits were women, but at least 15 so-called 'jihadi brides' - including Shamima Begum - have been publicly identified.