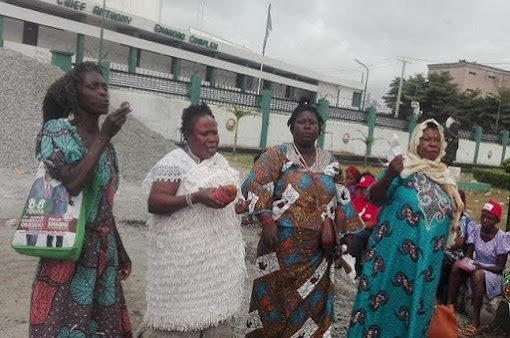 The battle for the control of the Edo State House of Assembly has taken a melodramatic turn as a voodoo priestess and spiritual leader of Ekutetebite Negwogho group, Princess lnibokun lmasemwenbor stormed the complex to curse opponents of Governor Godwin Obaseki.Accompanied by fellow occultists, the priestesses said they represented the female members of traditional worship centres in the Benin Kingdom.Chanting incantations, Priestess lmasemwenbor who said she inherited her symbol of authority as an occultist from her grandfather, boasted that whatever she pronounced on anyone will come to past.She spoke at the Assembly gate in downtown Ring Road: “I was at home when I saw on television the crisis at the Edo Assembly. I heard that some people from other ethnic groups are trying to turn Benin upside down. We Benin people don’t like what they are doing.“APC is oppressing Obaseki. Why I am interested in the matter is that we did not have an access road to my community before Obaseki became governor. We used to spend so much to come to Benin. But now, we can travel in and out of our community. We don’t suffer from erosion anymore.“For that reason, I must support Obaseki for a second term. Whoever says he will turn the state upside down to rig the election, let the heads of our ancestors torment him.“Obaseki is a peacemaker, he gave us amenities of life and for that reason, I have to back him up with my strength.”Princess lmasemwenbor predicted that the governor who is presently running on the ticket of the People’s Democratic Party (PDP) will be re-elected for another four years.She warned: “Nobody will grab it from him and whoever says he will turn the state upside down to subvert the wishes of the people, help us tell him that the head of our ancestors will torment the person. All the deities of the Benin kingdom will torment him or her.”