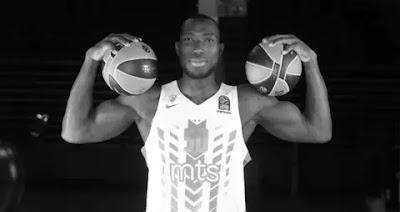 Nigerian basketball player, Michael Ojo, was announced dead by his last club on Friday. The Lagos born basketballer died at the age of 27 in Serbia’s capital, Belgrade.Ojo who played for KK Crvena zvezda Basketball club was 216 centimetres tall and weighed 147 kilograms in a Red Star jersey.According to a press statement by the management of KK Crvena zvezda; Ojo “wore the Red Star jersey for the first time before the start of the 2018-2019 season.“During two seasons, wearing a proud red-and-white jersey with the number 50, he won the hearts of all Zvezda players and well-meaning basketball fans in Serbia”. He won three trophies including “the ABA League title, the Serbian championship and the ABA League Supercup. His official contract with KK Crvena zvezda expired on June 30, 2020. years, and the club and Michael Ojo parted ways in more than friendly relations.”The club which noted the date and place of Michael Ojo’s funeral will be announced later stated that his sudden and shocking death “deeply affected everyone: the players, coaches, management and board of the club in which he was accepted from day one, and which he accepted as his own.”