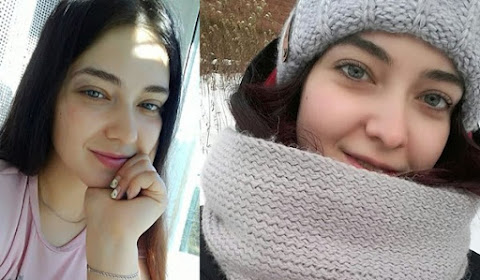 A 22-year-old woman has been convicted of beating two men to death, and “r3ping” one of her victims using a shovel handle.Elena Povelyaikina, a keen boxer, was jailed for 13 years in the Omsk region of Russia over the deaths.She attacked a “drunk” man, 37, who refused to leave the family home in the village of Mikhailovka, the court was told.“At first the girl brutally beat the man, and then she took a handle from a shovel and committed violent acts of a s3xual nature against him,” according to a statement from the Russian Investigative Committee.When he died, she “carried the body over the fence and threw it on the street.”The victim was pictured but not named.Police initially failed to find a suspect.Two months later she was drinking with locals and a man named Evgeny Grebenkov, 31, made “unflattering” comments about her gun-toting father Pyotr Povelyaikin.Her dad, 57, is a “wealthy” farmer who raised her and brother Valery, 26, as a single parent.“She jumped on him and inflicted many blows with her hands and feet, causing bodily injuries from which the man died the next day,” said the committee.After killing the second victim, she confessed to both murders.A local told Komsomolskaya Pravda newspaper:"Although small in stature, she’s strong. She was into boxing.”A witness to the second murder said: "When she was beating Ivan, my sister and I begged her not to touch him.“But we were afraid to intervene, because she is very strong.“He lay in the house for another day.“We did not call an ambulance, we thought he would recover by himself.“But the next morning he stopped breathing."State investigator Ivan Lyubyi said: "The defendant first confessed to both killings, then refused to testify.“She put forward several versions - that the first man died after he was hit by a car on the road, and the second from kidney failure, which he allegedly had.“But forensic analysis refuted these versions.”She was convicted of “intentional infliction of grievous bodily harm, resulting in death” and “violence of a s.e.xual nature”.Given a final word in court before starting her sentence, she “expressed condolences to the bereaved for the loss of their loved ones, but did not admit her guilt in committing the crimes,” said a spokesman for the prosecutor's office.The trial had been held in secret because of the s.e.x.ual testimony.Her fiancé Fyodor Kalmykov said she was “kind” and “could not harm anyone”."I will wait for her - I've never had such strong feelings for anyone in my life," he said.Her mother Vera claimed she was framed by enemies in the village.