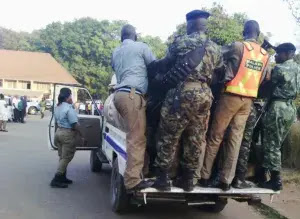 A court in Malawi’s capital Lilongwe has ordered the arrest of police officers who r.a.p.e.d and abused 18 women and girls during anti-government protests last year, as well as compensation payouts.“It is important that the officers … that s.e.x.ually assaulted and  r.a.p.e.d the applicants and all other women and girls… be arrested and prosecuted,” High Court judge Kenyatta Nyirenda said in the ruling issued Thursday.Seventeen policemen had been accused of raping and s.e.x.ually assaulting 18 women and girls during an operation to disperse demonstrators in October in three districts on the outskirts of the city.Three of the victims were under 18 years old.The Women Lawyers Association — which represented the women in court — hailed the judgement as a precedent-setting victory.“The effects of this case will be much broader than just in Malawi,” the association’s president, Tadala Chimkwezule said.“The justice system is not blind and this ruling is very pivotal to the human rights discourse,” she added.Thursday’s judgement was “one of the greatest rebukes to s.e.xual harassment against women and impunity by some police officers in Malawi,” agreed national Ombudswoman Martha Chizuma.A report compiled by the Malawi Human Rights Commission served as evidence in the plaintiffs’ lawsuit.Compensation amounts for the individual victims will be determined by the court’s registrar within 21 days.