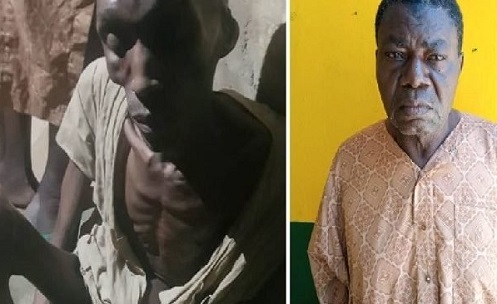 Ahmed Aminu, was 23 years old when his father and stepmother decided to cage him in an unused garage like an animal. For seven years, lived in the small space and in solitary confinement.Gone was his freedom. Freedom to eat, play and work as he might desire.He had no idea of what went around him even though what served as his shelter was located right there in his father’s  home, located at Farawa Baban Layi Mariri quarters, Kumbotso local government area – a suburb of Kano metropolis.Most times Aminu would be forgotten, and without food and water for days.Sometimes, he took his own urine to quench his thirst and his faeces as food.Now 30 years old, Aminu was all skeleton when the police in Kano rescued him on Thursday.His dad and stepmom had accused him of drug abuse. His father, Aminu Farawa, confessed that  he locked his son for only three years. He was arrested.With the help of a human rights group, Aminu was rescued on Thursday afternoon, police said.Sources said a resident of the area, Rahma Muhammad, alerted a human rights activist who informed the police about Aminu’s plight.A one minute video clip, which has gone viral online, shows Ms Rahma Muhammad saying “I have fulfilled my promise of rescuing him.”In the video, Ms Mohammad is heard asking the victim whether he wants to be rescued or to return to his cage (room).With only rags on him, Aminu had emaciated and lost his physical strength at the time he was rescued. A man in white garment and one policeman in uniform holding a rifle, held him onto a police van. The man in white sat next to him and they zoomed off, the video shows.“Aminu was locked by his parents on the suspicion that he had started smoking and getting involved in drug abuse.“His stepmother tried to hide him when the police arrived, insisting that he was not in the house. After a search, police eventually succeeded in rescuing him, an eyewitness Shehu Ibrahim, said.The police spokesman, Abdullahi Haruna, confirmed the incident to newsmen.Haruna said in a statement: “The Kano State Police Command wishes to inform members of the general public that on the 13/08/2020 at about 2315hrs, information received revealed that one Aminu Farawa of Farawa Quarters, Kumbotso LGA of Kano State locked up his biological son, one Ahmed Aminu, 30 years old, of the same address inside his car garage within his house for about seven (7) years without proper feeding and health care.“A Team of Operation Puff-Adder was raised and immediately swung into action. The victim was rescued and rushed to Murtala Muhammed Specialist Hospital Kano and admitted.“The father was arrested. Preliminary investigations revealed that the father confessed to have locked-up the victim for three (3) years on allegation of suspected Drug-Abuse.“However, the Command’s Commissioner of Police, Habu Sani, ordered that the case be transferred to State Criminal Investigations Department (SCID) for Discreet Investigations.”Haruna said the police are investigating and gathering information on the case, to unravel the reason for Aminu’s confinement.The arrest of Aminu’s father came only five days after another father in Birnin Kebbi was similarly apprehended for allegedly chaining and keeping his 11 year old son in an animal stall for two years.Arrested along with the boy’s father were his three wives.Jibril lost his own mother about two years ago.